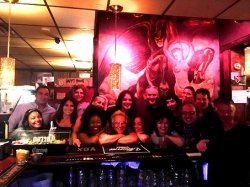 The musicians were in town participating in the School of Rock On Tour music education event, held in conjunction with Summerfest. The two-day festival within a festival pairs 500 students to perform with professional guest artists.

"For the second year in a row, we were honored to host such an eclectic group of musicians, spanning genres from classic rock and punk to modern pop," said Kalkounos. "They loved the 'old school' vibe of Five O'Clock and indulged in some of our popular steak and seafood dishes. We even left our wheelhouse with artfully- prepared vegan dishes for some of the guests."

In 2013, The Alley Cat Lounge at Five O'Clock Steakhouse opened as a live music and event venue, attracting top local and national musicians. The events schedule can be found online at www.fiveoclocksteakhouse.com.

About School of Rock

For over a decade, School of Rock has been teaching guitar, bass, drums, vocals, and keys to students through an innovative performance-based method. Through a series of private lessons and group rehearsals, students get to show what they're learning on real rock stages to real rock audiences. More information can be found at http://www.schoolofrock.com/
Contact
Five O'Clock Steakhouse
Amanda Behrman
224-623-3235
www.FiveOclockSteakhouse.com