Talia's Steakhouse & Bar, a Manhattan Kosher Restaurant in NYC, Announces They Will Offer Nine Days Menu Prior to the Jewish Fast Day of Tisha B'Av 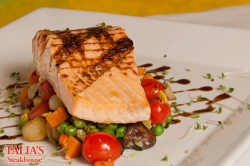 New York, NY, July 30, 2016 --(PR.com)-- Starting Wednesday evening, August 3rd, most Manhattan kosher meat restaurants in NYC, will create a special menu, called The Nine Days Menu or The 9 Days Menu. This menu includes fish, pasta and vegetarian options, replacing meat and chicken dishes of the meat restaurant's regular menu. Glatt kosher restaurants in Manhattan and other places in the world that usually serve kosher meat and wine, create this Nine Days Menu in order not to shut down the business for nine days, since eating meat and drinking wine during these nine days is not permitted according to Jewish laws and customs.

The Nine Days take place during the first nine days of the Jewish calendar month, called Av, which usually fall out around July or August. It is a religious observance and according to the Talmud, "When Av begins, we diminish rejoicing" (Talmud, Taanit 26b). This year, 5776, or 2016, the dates from July 23rd until August 14th - the three weeks prior to the fast day of Tisha B'Av, which falls on August 14th - are considered a period of mourning over the destruction of the Holy Temple. The dates from August 3rd until August 14th are named The Nine Days, in which heavier mourning related restrictions are imposed by Jewish law.

The fighting in Jerusalem lasted for three weeks until Tisha B'Av, when the Temple was completely destroyed. Both the first and second Temples were destroyed on Tisha B'av. The first Temple was destroyed in 586 B.C.E. by the Babylonians and the second Temple by the Romans in 70 B.C.E. These tragic events have been mourned throughout Jewish history and observed by fasting on the ninth day of Av. We mourn both the loss of the Land and the spiritual center of Jewish life by being in exile.

In keeping with the diminished enjoyment, the last nine days of the three weeks are more stringent with the mourning aspect, including refraining from haircuts, shaving, listening to music, eating meat, and any other entertaining activities. During this period of time, Orthodox Jews mostly eat dairy, fish or parve products, refraining themselves from meat and wine. For NYC kosher restaurants, this may pose a bit of a problem, especially if you are a kosher steakhouse in Manhattan. As a kosher restaurant, what can be done to lure clientele who are forbidden from eating any meat for nine days (excluding the Sabbath)?

For those who observe the restrictions of the Nine Days, Talia's Steakhouse, an Upper West Side of Manhattan kosher restaurant, has been accommodating guests for over twelve years with a unique and special Nine Days menu which contains a large selection of gourmet fish, pasta and vegetarian dishes. For nine days, Talia's Steakhouse will become Talia's Fishhouse. While there are plenty of meat and non-meat meal choices, live music will not be available during the entire Three Weeks period.

Just because meat is prohibited during The Nine Days, does not mean that kosher steak houses need to totally shut their doors for this period of time. The Sephardic Jews' custom is to not eat meat and drink wine only from the Sunday before Tisha B'av. Many Yemenite Jews only refrain from meat starting the day before. Furthermore, meat and wine are permitted on Shabbat and for seudat mitzvah, such as brit milah. Furthermore, one may have meat during these days if required for health purposes, such as an anemic person, pregnant woman or someone who just gave birth. It is always wise to ask your Rabbi about the laws and customs during this period if you have any doubts.

Nowadays, kosher restaurants in Manhattan still have plenty of non-meat dishes that they can serve to customers. So, Bon Appetit.

For further queries and information, feel free to visit the website of Talia's Steakhouse & Bar: