“Welcome to Vale” – It’s All About Story
MarchQuest’s story is set in the fantasy world of Vale where the player takes on the mantle of “The Marchwarden,” a mythic hero called from Earth. However, the foreign world the player enters is one plagued by civil war. To become that Hero, the player must traverse the lands of Vale in their struggle to unite and win the hearts of the people or see the world of Vale fall to ruin.

Along the player's journey they will meet an intriguing cast of fully rendered, lifelike characters and companions who join them on their quest. Each Quest begins and ends with an RPG-style dialogue sequence where the player's choices shape the story. The player's deeds will be noticed!

“With MarchQuest, we’ve designed an experience that works for every player,” said Aharon Cagle, Creative Director and Founder at Loreful. “Whether you are just getting back into daily walking or are already an avid runner, MarchQuest works at your pace and activity level.”

MarchQuest is exclusively available for iPhone on the App Store today.

Season 1 consists of 20 Quests (or Workouts) that last between 30 and 60 minutes.

Allows players to listen to their own playlists or prefered music app while questing.

Apple Watch and Android support will be launching in 2017.

Assets can be downloaded from http://marchquest.com/presskit 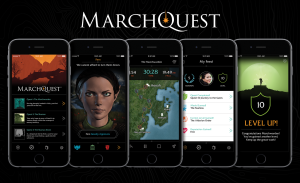