Adwyse & Co. aspires to change the restaurant experience for everybody. What if there was a device that could bridge the communication gap between guests and waiters, support restaurateurs and serve as an atmospheric light gadget? Introducing: the Ordercube. 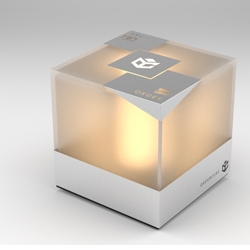 Munich, 1. September 2016 – The Ordercube by Adwyse & Co., the Munich-based firm of young founders Daniel Pasternak and Igor Suslov, is their idea to simplify ordering in restaurants. The illuminated cube made from acrylic glass and powered by rechargeable batteries replaces the candle on every table. When the guest is willing to be served, the cube can be activated via touch sensor. This allows the waiter to see, if patrons want to order or pay, and in which order. Furthermore, the Ordercube can be operated via app. The advantage: Staff immediately see who wants to order and who wants to pay. Thus customer complaints about bad service are a thing of the past. The cube in high-end design can now be pre-ordered on the Web page (http://ordercube.de) and, for a special price of 67 Euro, on Kickstarter, starting 30 August 2016. Restaurants also have the opportunity to apply for a test run.

“Served too late,” “hour-long wait for the bill,” “other patrons were served first” – every restaurant owner knows complaints like these. Friends Daniel Pasternak and Igor Suslov are introducing the handy Ordercube as an elegant and technically refined solution: It simplifies ordering and thus makes it fairer. The Ordercube is an acrylic glass cube powered by rechargeable batteries and equipped with lighting. It stands on every table of the restaurant. If a patron wants to make an order, they touch the technically sophisticated and visually attractive cube. It is activated by a touch sensor. Now a preset time range starts which, depending on patron numbers, can be individualised via app (e.g. 30 minutes) and which includes a colour progression from green via yellow to blue. It thus takes the waiter only one look to see, if a customer wants to order, the order in which the customers have asked to make an order and how long each customer is already waiting for his order to be taken. The waiter takes the order and turns the Ordercube off with a quick touch or via app. If the preset maximum waiting time is exceeded, the Ordercube pulsates in blue.

The robust Ordercube has been developed to meet high quality standards and especially for the straining everyday conditions of gastronomy and is produced in Germany. It is thus ideally equipped to guarantee a smooth and stable workflow. The Ordercube’s characteristics are a coating that is resistant to dirt, a complete individualisation via app and a brightness sensor adapting to the time of day. The running time is 30 hours. Via the creatively designed charging station, which can also function as an eye-catcher, the Ordercube can be recharged within two hours. Furthermore, it is waterproof and shock-resistant and equipped with an electronic touch sensor. Test runs in Munich restaurants have been considered a success by all participants, the owners are speaking of positive reviews in social media as well was larger tips. Further test runs are planned for which restaurants can apply to the founders.

Quote Winfried Gärtner, manager, The Caribbean Embassy Munich, test run participant, “The likeliness that a customer is aggravated because he isn’t served is reduced. Thus, we increase the sales volume as well as tips, but also the chance that the customer will return, because he thinks: Everything is perfect, not only the food but also the atmosphere and the obliging service.”

Quote Abduharim Battalbas, proprietor, Mocca Munich, test run participant, “At first I was very skeptical about the Ordercube and it took Daniel quite a lot of work to convince me to partly equip my restaurant with the order cube. My biggest fear was that customers might immediately start to think that the waiters are too incompetent to get by without the order cube. With hindsight, however, I clearly have to admit my distrust: Not one person of my mostly long-established patronage had anything bad to say about the cube. Apparently, people are much more open to new things than one would think.”

Quote Gerhard Schäfer, manager, Hotel Management School Garmisch-Partenkirchen, “Does the gadget have potential? I am convinced that it will have a raving success.”

Quote Daniel Pasternak, founder, “We are convinced that this is an innovation which is long overdue and which not only patrons are wishing for.”

Quote Igor Suslov, founder, “For me it is primarily the combination of design and functionality in a simple and easy-to-understand fashion that inspires our idea.”

Film footage and more information on the history of the founders and the Ordercube can be found here: https://drive.google.com/open?id=0B_LEojg8MyTdRVlmclRHN2R4TFU