Entrepreneur, Kristin Sathe, of Aunt Kitty's Design, in association with The Artisan Group, will participate in the luxury celebrity gift lounge in honor of the 2016 Primetime Emmys Nominees and Presenters hosted by GBK Productions on September 16-17, 2016. 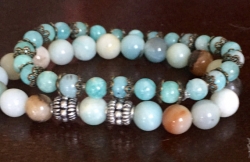 Denver, CO, September 13, 2016 --(PR.com)-- Aunt Kitty’s Design, in association with The Artisan Group, is pleased to announce participation in an invitation-only luxury celebrity gift lounge hosted by GBK Productions on September 16-17, 2016 at an exclusive location in Beverly Hills, California in honor of the Primetime Emmys nominees and presenters.

All attending celebrities, select press and media, and other VIPs will receive Aunt Kitty's Design amazonite bracelet combo in their swag bags. This event will also be attended by around forty press and media outlets.

To learn more about Aunt Kitty’s Design and their products, or their participation in this exclusive event, visit https://www.etsy.com/shop/auntkittysdesign or email kristin@auntkittysdesign.com.

About The Artisan Group
The Artisan Group® (http://www.theartisangroup.org) is a premier entertainment marketing group dedicated to representing small business artisans at the best celebrity gift lounges and press events. The organization provides a collective sampling of handcrafted products to celebrities and members of the press at top luxury gift lounges such as those leading up to The Academy Awards, The Golden Globes, The MTV Movie Awards and The Primetime Emmys.

The Artisan Group also coordinates product placement of its member's handcrafted products on such hit television shows as Scandal, The Voice, The Vampire Diaries, Days of Our Lives, The Young & The Restless, Modern Family, Jane The Virgin and Law & Order: SVU, among others. Membership in The Artisan Group is juried and by invitation only.