Kevin Cain, and Alabama author, paranormal investigator and haunted collector releases his third novel, "Tammy Baby," based on the true story of a haunted doll. 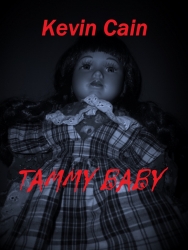 Birmingham, AL, October 13, 2016 --(PR.com)-- With the Halloween season upon us, fans of supernatural stories just might be interested in reading "Tammy Baby," the new novel from Alabama author and paranormal investigator Kevin Cain. The novel is based on, what the author claims, is a real haunted doll named Tammy, just one of the many haunted items that can be found in Cain's home museum.

The novel mainly centers around three sisters, Agatha, Tabitha and Samantha, who have shared a dark secret from their childhood. Ten years ago, their six year old stepsister Tammy drowned in the bath tub from a prank gone horribly wrong. Though it was ruled an accident, the three girls, now grown women, know it was much more than that. They should have confessed, but they vowed with each other never to tell a living soul what really happened that fateful night. Now, the lovely doll that Tammy once cherished has mysteriously appeared in each of their homes. And a nightmare of unspeakable revenge will soon befall them one by one. Has Tammy's spirit returned to exact vengeance?

Was this a true story? According to Kevin, "the actual doll itself, and the spirit of Tammy who haunts it, is quite real and sits in his home. The doll originally came from St. Louis where the real Tammy lived until she died at the age of six back in the early 1970's. While it is true that Tammy was a real child who was really tragically drowned by her stepsisters in a prank gone wrong, the present day portion of the story involving the grown-up sisters is a fictional account but still just as chilling as the doll itself. The real Tammy actually owned the doll. A present from her step-father, she cherished it and carried it wherever she went. After her death, mysterious things often occurred around the doll like the sound of a small girl's voice being heard where no child was anywhere around. Objects moved on their own. The doll itself even changed positions on its own when no one was around. It passed through the hands of a few frightened owners until it was rescued by a fellow paranormal researcher who passed it on to me for safe-keeping."

"Since I obtained the doll," he says, "the spirit has made herself known in his house. He has heard the little girl playing in his own bathroom, opening and shutting the cabinet doors in there and turning the water faucets on and off. He even left a voice recorder in the bathroom that capture the voice of a little girl talking. She has proved to be a very pleasant spirit with no harmful intentions. She just still loves her doll and has decided to stick around it in death."

It is no wonder that Tammy's story and spirit inspired Cain to write his latest novel "Tammy Baby" which he even dedicated to her. "Tammy Baby" is now available in paperback and on Kindle.
Contact
Kevin Cain
205-215-2242
www.kevincain.webs.com