Continental, one of the top automotive suppliers in the world, has deployed an interactive video kiosk Personal Teller Machine from SAFE Federal Credit in its plant in Sumter, SC. The PTM will allow employees to conduct their banking business remotely during their shift. 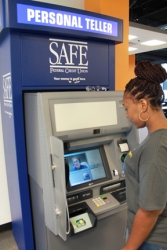 When SAFE placed the PTM at the Continental plant, it became the first manufacturing facility in the nation to host one of the NCR-made PTMs on-site.

The machines are like ATMs, but also allow credit union members to interact with a live teller via a video screen and audio connection, similar to a Skype call. The teller is located several miles away at the SAFE headquarters. Users can conduct most any transaction typically handled at a credit union branch via the PTMs.

The Continental Sumter facility is now also one of the largest SEGs (Select Employee Groups) for SAFE, which has more than 500 such corporate partners. The Sumter plant has more than 1,000 employees. SAFE has also been designated the preferred direct deposit institution for plant employees.

“This PTM delivers the ultimate in convenience for Continental employees,” said Michael Baker, Vice President of Operations for SAFE. “The nearest SAFE branch is several miles away, and it isn’t always easy for workers to do their banking during their workday. With this PTM right there in the plant cafeteria, banking is no longer a challenge.”

Angela Sieber, Sumter Plant Operations Coordinator for Continental, originally set out to see about arranging to get an ATM placed in the cafeteria for employees’ convenience. “As we looked into this, we saw that SAFE could provide us something much better than a traditional ATM, with a good relationship as a bonus,” Sieber said.

“As we are happy to offer that benefit, we’re already seeing tremendous interest from our employees in this PTM,” noted Roman Nosko, Human Relations Manager at the Continental Sumter plant. “The interaction it offers makes banking much more personal, in addition to the greater convenience.”