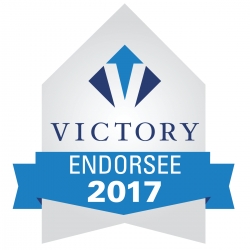 “We were proud to endorse Alex in 2009 and 2013, and are thrilled to endorse him again today,” says Victory Fund President & CEO Aisha Moodie-Mills. “Alex has been a staunch and vocal supporter of the District’s diverse neighborhoods, and embraced his role on the City Council with an admirable collaborative leadership style. His service and leadership during a time of great political change for LGBT people is critical – and Atlanta will be a better city with Alex leading the City Council.”

“I am honored by the support of Victory Fund,” says Wan, whose professional experience includes the private, public, non-profit and higher-education sectors, is in the fourth year of his second term representing District 6 on City Council. “Victory Fund’s candidate training and support played an important part in my public service journey and helped lead to my initial decision to run for office and, now, as I seek to continue my service. I look forward to continuing to move away from politics as usual, with genuinely collaborative engagement between all of the city’s stakeholders.”

In his bid for Council President, Wan says he will continue to leverage deep roots in the community, long-time civic leadership, business acumen and his record during seven years at city hall. “I’m eager to continue working on tough issues like transportation, infrastructure, affordable housing, operational efficiency, sound fiscal stewardship, public safety, individual and collective economic prosperity, and quality of life,” he says.

Wan was first elected to the City Council District 6 post in 2009 and easily earned a second term in 2013 with 76 percent of the vote, both times garnering a broad base of support. He is the first Asian American and first openly gay man to serve on Atlanta City Council. He is (currently) Director of Development and Alumni Relations at Emory University.

Raised in Atlanta and a Morningside homeowner for over 20 years, Wan was perhaps best known before his Council win for long-time community involvement, including service on the Invest Atlanta (formerly Atlanta Development Authority) Board and founding For the Kid in All of Us, an all-volunteer non-profit serving children in need. He currently serves on Boards of Directors for the Piedmont Park Conservancy, the Little Five Points Community Improvement District (CID), and the Olmsted Linear Park Association.

He holds a Bachelor’s in Industrial Engineering from Georgia Tech, a Finance MBA from Wharton Business School, and has completed educational programs at Dartmouth and Harvard.