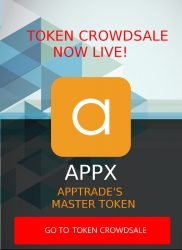 Powered by the digital token APPX, Apptrade creates portfolios, or groups, of apps, where if one of those apps becomes the next Instagram or Angry Birds, then the value of the portfolio rises.

Ronny Boesing, CEO of OpenLedger ApS, explained that Apptrade’s initial token offering (ITO) changed its valuation in the middle of its crowd sale as an immediate response to the result of its preliminary offering. Boesing said, "The Apptrade platform is much too important to not succeed, and it was clear that we needed to adjust the valuation to make it more appealing to anyone deciding to participate. In addition, we wanted to show our belief in this project, and felt that there was no better way to show this than putting our money where our mouth is. OpenLedger will be adding a total of $100 000 USD to the Crowdsale over the next 7 days."

The minimum fundraising goal is $1M USD with a cap of $5M USD. With a total of 8.25M APPX tokens on offer, OpenLedger's Apptrade ApS will back these tokens with 20% of the future revenue from the Apptrade platform, and any unsold tokens will therefore be distributed proportionally to all participants.

All early bird participants, as well new participants, will receive the extra tokens according to the published Stage 1 structure, plus benefit from the additional tokens to be divided.

Daniel Pineda, Founder of Apptrade says, "After listening carefully to feedback from public and private supporters, and with great consideration, we decided to update our master token valuation. We firmly believe that our platform, built on the ecosystem of OpenLedger and powerful BitShares financial trading technology, is a strong Blockchain project that will be a success for years to come. We feel that this is the right action to ensure a satisfactory outcome for all."

Apptrade’s final valuation is going to be based on the amount raised, whether $1M USD as its threshold or money back guarantee, or the maximum of $5M USD. The valuation of the Apptrade platform will be determined on what is raised. The deadline according to the escrow agreement is set to end on April 30 2017.