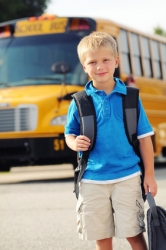 Tampa, FL, April 28, 2017 --(PR.com)-- The Tampa Bay Area Regional Transportation Authority (TBARTA) has announced a partnership with local education-technology company PikMyKid to bring their real-time mobile app dismissal management system to 20 select schools across the Tampa Bay area. Through a $115,000 grant provided by the Florida Department of Transportation (FDOT), District 7, TBARTA will be covering the full-cost of the yearly licensing fee for schools identified in Citrus, Hernando, Hillsborough, Pasco and Pinellas Counties, with the goal of reducing school traffic congestion created by pick up and drop off lines as well as improving the safety and reliability of transportation in getting students to and from school.

The PikMyKid app works by creating a virtual geographic boundary, known as a “geofence,” around each school site that connects with the mobile application. When parent’s check-in with the app, the order of dismissal is automatically sequenced with the car line, streamlining the process. The application also provides enhanced security features for parents and guardians, such as instant push-notifications to parents and school staff when each child/student boards their bus or car for the ride home and instantly communicating any schedule changes or emergency notifications that need to be sent out by the school.

Starting last month, TBARTA began meeting with each school district to present the project to transportation staff and school board members and request their support in identifying candidate schools for the pilot. Since 2015, several schools in Tampa Bay have implemented the PikMyKid program, and feedback from those schools played a large role in TBARTA facilitating the partnership. “The change in transportation has really assisted our front office and it’s been wonderful to have a ‘silent dismissal,’” said John Legg, former state senator and co-founder of Dayspring Academy Charter Schools. “We have had over 98% parent adoption within the first four weeks of launch,” said Renu Parker, a parent at Berkeley Prep School parent in Hillsborough County, "From a parent's point of view, it was revolutionary. It made a huge difference." The PikMyKid application has received acclaim across the United States as well, including in several technology publications, such as a listing by Popular Mechanics in 2015 as one of “6 Startups You Need to Know.” (http://www.popularmechanics.com/technology/startups/g1965/6-startups-one-spark-2015/?slide=6)

PikMyKid founder and CEO Pat Bhava himself experienced the frustrations of the pick-up and dismissal process, and set out to make the school dismissal management smarter, safer, and cheaper in designing the software. “Waiting in the pick-up line an hour each day, I would watch school staff run around to keep the process moving,” said Bhava. “I thought, there has to be a better way that actually works for the schools and teachers while keeping the parents happy and the kids safer.”

In addition to subsidizing the first-year costs of the app for schools, TBARTA is also planning to assist PikMyKid in developing features that will further reduce school traffic congestion and increase parent engagement, starting with real-time predictive traffic notifications, which will communicate with parents the optimal time to leave for drop-off and dismissal. Automated ridematching for participating parents is also planned, whereby the app would automatically identify common routes for students attending the same school, and send a push notification to parents to encourage carpooling. “Work commuters aren’t the only ones facing road congestion and lack of transit availability in our region, and school commuting is a very specific type of transportation need with far more security required in its delivery,” said Michael Case, the Principal Planner for TBARTA. “TBARTA was looking for ways to improve its school commute program, and PikMyKid was doing exactly what we identified as needed to bring it to the next level.”

While it will be up to the school and/or district to continue with the program after the pilot ends, research from the University of South Florida College of Business shows it can be well worth the investment. According to the study, schools that subscribe to the system can save up to $43,000 annually in labor, transportation, and traffic management related efforts. With TBARTA fully subsidizing the first-year for select schools new to the program, the savings can be even greater. “We really want this to be a part of how we address school congestion in our region,” said Ray Chiaramonte, TBARTA Executive Director. “The effort will be data-driven, with the intention of showing the impacts to safety and efficiency for each school at the end of the pilot.” (http://tbarta.com/files/PIKMYKID-_Business_Analysis-USF_2014pdf.pdf)

Since 2004, TBARTA has provided its Regional School Commute Program to schools that face transportation and related safety issues through computerized ridematching for carpooling, “walking school buses,” and “bicycle trains.” As a program funded by the FDOT District 7, the service is available free of charge to schools in Pinellas, Hillsborough, Pasco, Citrus, and Hernando Counties. Currently, there are over 2,000 parents and 66 schools participating between Pinellas and Hillsborough. Through the PikMyKid partnership, the Authority intends to bring schools from the Pasco, Citrus, and Hernando on board as well.

For more information about TBARTA and the PikMyKid Partnership, contact Michael Case at (813) 282-8200 or michael.case@tbarta.com.

For information on the PikMyKid application, contact Pat Bhava at (813 649-8028) or pat@pikmykid.com or go to www.pikmykid.com
Contact
PikMyKid
Saravana Bhava
813 649 8028
www.pikmykid.com