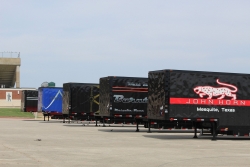 Edmond, OK, August 26, 2017 --(PR.com)-- Clubhouse Trailer Co., LLC has delivered another fleet of custom marching band trailers to each of the five high schools in Mesquite, TX. Building on its recent explosive growth the Clubhouse team, led by Jeff Hadley and Drew Taylor, worked closely with the Mesquite ISD Administration, the Fine Arts Department, and the Band Staffs from each of Mesquite’s five high schools to determine the needs of each program to design and build a custom marching band trailer unique to each program.

Once the budget and design were approved, the team at The Clubhouse worked with their exclusive broker to source a DOT inspected 51 foot or 53 foot moving van to be the foundation for each custom buildout. Concurrent to the delivery of each trailer to The Clubhouse the critical graphic design was being finalized between the Director of Fine Arts Steve Andre, the Districts’ talented graphic artist Daniel Muzquiz, and each band staff. Each trailer exterior was then painstakingly prepared by the expert team at City Trailer in Oklahoma City. The City team led by President Richard Walker prepared each trailer to receive its jet-black paint by making repairs to the trailer body and running gear as necessary, sandblasting and priming each trailer before painting in their EPA controlled paint booths then coordinating the installation of the full-color 3M graphics to become the billboard for each school and band program. Then the Clubhouse team fitted out each trailer to its unique configuration including features such as a full second floor, director’s perch, custom shelving, exclusive floating stairs, hydraulic ramps, color guard drawers, and Tubavator equipment lift. Each trailer was equipped with a solar panel to take advantage of the Texas sun to keep its battery bank charged to power a full complement of LED lights for illuminating the loading process at contests and football games. Then each trailer was finished with the Clubhouse trademark polished diamond tread rear taillight panel.

Clubhouse Trailers founded in 2010 by Jeff Hadley and Drew Taylor was created by these two “Band Dads” after the successful rollout of Bulldog One at Edmond Memorial High School where their kids were all in the band program. These two knew “there had to be a better way” and created the only company in the US focusing on the transportation and logistics of the Marching Arts. Clubhouse Trailers has completed projects for band and marching programs throughout the US including the World Class DCI Corps The Cavaliers from Rosemont, IL. At the recent reveal in Mesquite, Drew spoke to the gathered crowd of students and supporters about the ardent desire of The Clubhouse team to work with the Mesquite team because of their strong connection to innovation and community involvement, which are hallmarks of the Clubhouse offering. With the delivery of the 12th through 16th trailers the Clubhouse Team, made up primarily of the Hadley and Taylor families, have already begun their 17th and 18th trailers for a high school in Louisiana and a SEC college. The Clubhouse team continues to consult with other programs that want a DYI option to building their own trailer as well as supplying custom kits of their most popular products. Check us out at www.clubhousetrailers.com or email to info@clubhousetrailers.com and http://facebook.com/clubhousetrailers.
Contact
Clubhouse Trailers, LLC.
Drew Taylor
405-509-8858
www.clubhousetrailers.com