A specialist on the life of Christopher Columbus is again casting doubt on the traditional account of the great navigator’s life and deeds by unveiling a painting of Fort Navidad - the first settlement in the New World - at Potomac State College of West Virginia University. 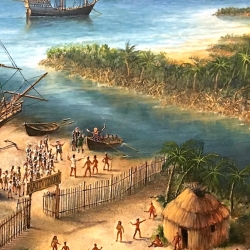 Keyser, WV, October 06, 2017 --(PR.com)-- Specially commissioned for this Columbus Day event, the painting depicts the fate of Columbus’ flagship, the Santa María, according to new facts presented by Manuel Rosa. His dramatic new findings prove conclusively that the Santa María was not accidentally lost at sea on Christmas Eve of 1492, as has long been believed; it was marooned.

According to Bob Lamming, "This one fact by itself demolishes an immense complex of myth, fraud, confusion and controversy that has for centuries surrounded the role and identity of Christopher Columbus – though the reasoning to support this claim is both too intricate and too broad in scope to be summarized in a few words. Suffice it to say that Christopher Columbus was a radically different character, on a radically different mission, from what has long been supposed – and that another US institution of higher learning is standing forth to shine a light on this historic truth."

Widely regarded as the world’s foremost authority on Columbus, Manuel Rosa was drawn into his own impassioned “voyage of discovery” in 1991, during preparations for the Quincentennial in Spain and Portugal. In 2006, he began to publish the astonishing results of this research in his native Portugal. Rosa will appear this fall at lectures and book signings in Portugal and Poland, where heavily updated translations of his book are about be released. The earlier Portuguese and Polish editions sold out quickly.

Last year’s pilot translation of Rosa’s book into English – with four completely new chapters, all told nearly a third of its paradigm-busting content – was planned to coincide with the 500th anniversary of the great explorer’s death. COLUMBUS: The Untold Story, won the 2017 Independent Press Award in World History, and the Huffington Post called it, “the best self-published book on History in 2016.”

The real Columbus, according to the specialist, was not an Italian commoner at the orders of the Spanish monarchy, but a nobleman entrusted by the Portuguese king to give the New World to Spain in order to protect India’s spice trade for Portugal. Marooning the Santa Maria was all part of the ploy.

“I have been doing historical research for over 50 years and found Manuel Rosa's book to be an extraordinary piece of archival research.” - Dr. E. Lee Spence, Underwater Archaeologist. President, Sea Research Society.

While supplies still last, copies of the special limited edition may be purchased on Amazon or at the author’s website: www.Columbus-Book.com.

The lecture is free and open to the public. A question and answer session will follow. For questions regarding parking, please call Mary F. Shipper Library at 304-788-6901.
Contact
Association Cristovao Colon
Margarita Vinyatskaya
919-289-0030
www.manuel-rosa.com