The Buckhead Coalition has endorsed Alex Wan, who is seeking the Atlanta City Council President seat after two successful terms on Council. www.AlexWanForAtlanta.com 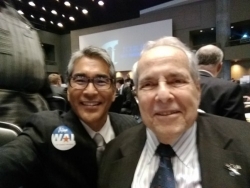 The Buckhead Coalition is North Atlanta’s prestigious chamber-type organization. It is comprised of 100 business leaders, and its leader, Sam Massell, is a former Atlanta mayor and has long been referred to as “the Mayor of Buckhead.”

“I am proud of the support of the Buckhead Coalition,” Wan says. “The Coalition embraces crucial issues that affect all of us in the Metro area, like economic opportunity, transportation and infrastructure, building safe and affordable communities, and the fiscal insight and track record to pursue the needs of a world-class City while also being a good steward of tax dollars.”

The Coalition’s Massell issued a strong plea for attention to these races, stating “the Legislative Arenas of government are integral partners with our Executive Branches which is why we separate our endorsements. Having served as President of Atlanta’s City Council (then called the Board of Aldermen) for eight years, I can recite many instances where the Council made the decisions that aided in smooth management of the City. Thus, it behooves us all to become informed and get involved in all such contests.”

In addition to the Buckhead Coalition, Wan has been endorsed by Georgia Equality and The Victory Fund. He also received the Committee for a Better Atlanta's highest possible ranking, "Excellent.” Wan’s score of 96 out of 100 was the highest in the field in the Council President’s race.

“The Buckhead Coalition’s endorsement is a strong signal that Atlanta’s business leaders recognize that Alex has the experience, business acumen, financial insight, temperament and vision to lead Atlanta City Council as its President,” says Ken Britt, a longtime political activist who is advising Wan’s campaign; Britt was an executive with Alston & Bird.

Wan was first elected to the City Council District 6 post in 2009 and easily earned a second term in 2013. He is the first Asian American and first openly gay man to serve on Atlanta City Council. Raised in Atlanta and a Morningside homeowner for over 20 years, Wan was perhaps best known before his Council win for deep roots in the community and long-time civic leadership.

On Council he has become known for being able to disagree with Council colleagues or the Mayor respectfully, maintaining relationships needed to collaborate when needed, but also being resolute when necessary, always working to understand the many different sides to the issues with which Council deals regularly.

The former small business owner holds a Bachelor’s in Industrial Engineering from Georgia Tech, a Finance MBA from Wharton Business School, and has completed educational programs at Dartmouth and Harvard.