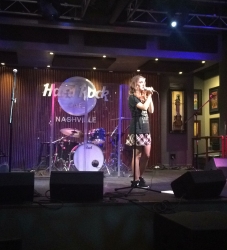 Berwick, PA, October 19, 2017 --(PR.com)-- Thirteen year old Rose Ostrowski of Berwick, PA recently returned from Nashville, TN after kicking off her third annual “Adding Tomorrows” tour at the Hard Rock Café. Using her singing and musical talent, Ostrowski hosts the annual tour to help raise awareness and donations for the Cystic Fibrosis Foundation, to find a cure for the disease that took her cousin, Camillia in 2012.

The teen is excited that her third annual fundraiser for the foundation is underway and she had a wonderful time at her gig in Nashville.

“I can’t believe how well everything went and how nice everyone from the Hard Rock Café was to me. The coolest thing is that they invited me back.”

“It was definitely a blast being on stage there and I’m looking forward to the upcoming shows on my schedule.”

Since, she has performed at the Columbia Mall near Bloomsburg, PA and the Laurel mall in Hazelton, PA, netting over $150 in donations for CF research.

The next date on her schedule is Saturday, October 28 at the Lehigh Valley Mall in Allentown, PA. She’ll be at the elevator court near Hollister at 3 PM. Her events following will be at several Pennsylvania shopping malls until the tour concludes near the end of February at the Marketplace at Steamtown in Scranton, PA on February 24.