Life(time) in the Fast Lane

A Denver based home improvement company, Lifetime Windows & Siding, is recognized as one of the fastest growing companies in the metro area. 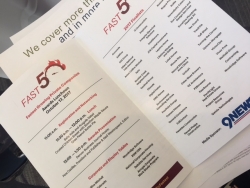 Denver, CO, October 20, 2017 --(PR.com)-- The Denver Business Journal honored Lifetime Windows & Siding as one of the top 50 fastest growing companies in the metro area, at an award luncheon Tuesday held at the Grand Hyatt Denver.

The award was formerly known as the Fastest-growing Private Companies Award, and the finalists were chosen based on percentage of fiscal growth in 2014, 2015 and 2016.

Lifetime was 5th in their category, with a revenue growth of 131%. “It was great to see so many local businesses flourishing and we are honored to be recognized among such innovative Colorado companies,” said Peter Svedin, CEO and co-founder.

Lifetime was founded in 2009 by Svedin and Jason Lewis, co-founder and managing partner. The two started working together out of a one-bedroom apartment, and since then have grown the business to a multi-million-dollar company with locations in Phoenix and Denver.

“Being nominated for this award was a huge honor, and shows how hard our team has worked to become one of the most established home improvement companies in Denver,” said Svedin. “We look forward to growing even more in the coming years.”
Contact
Lifetime Windows and Siding
Johanna Snow
720-556-1440
lifetimewindowscolorado.com