Military spouse/veteran couple Melanie and Bill Woods focus on bringing order and reducing stress to central Ohio, one household at a time. 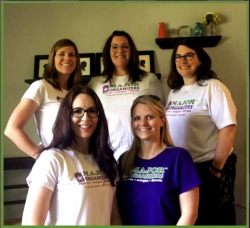 Columbus, OH, October 25, 2017 --(PR.com)-- When Melanie and Bill Woods launched their Major Organizers® franchise in Columbus, Ohio one year ago, they were sure owning a business in a field Melanie loved would offer an opportunity to manage their destiny.

Woods learned about the franchise opportunity by watching Shark Tank, an ABC broadcast, whereby CEO Angela Cody-Rouget presented the idea to the "Sharks." Woods decided to pursue owning a Major Organizers® franchise business, seeking to control her destiny, and liberating Columbus, OH residents from clutter one household at a time. "It is an honor to have other veterans and military spouses join forces with me to raise an army of Liberators to restore order to households across America," said CEO Angela Cody-Rouget.

Bill and Melanie are proud to be a Veteran-owned business and continue to support veterans through volunteering, donating, and offering discounts within their company. Bill is a veteran of the Army and National Guard, where he served as a Medic. Melanie’s dad is a Vietnam veteran who served in the Army, and her grandfather was a Marine who served in the Korean War.

“I can't believe it's been a year! If you'd have asked me two years ago where I'd be today, my response certainly would have been ‘I'll still be an Oncology Case Manager'. My life took an unexpected turn, which allowed me to step out of my comfort zone, leave a secure job, and open the very first franchise for a business I love. Though I technically knew what to expect as a new Major Organizers® franchise owner, I'm not sure anything could've prepared me for the adventures I've had; traveling, conferences, networking, meeting so many great new people, growing our team, and liberating clients,” said Woods. “Thankfully, having a mentor like Angela made operations run smoothly during our first year,” continued Woods. “I'm so happy to be able to help people. It brings me joy to visibly watch anxiety disappear as clutter disappears from clients’ homes!”

Melanie is a member of the National Association of Professional Organizers (NAPO), NAPO-Ohio, and Faithful Organizers. She is excited to be a part of Major Organizers and looks forward to expanding her team to help achieve our mission of raising up an army of Liberators to restore order to the world, one household at a time.

The Woods family is proud to be a Veteran-owned business and will continue to support veterans through volunteering, donating, and offering discounts to veterans; as well as, police officers and firefighters.

To learn more about opportunities in Columbus, OH, or obtain your free estimate: https://www.majororganizers.com/columbus/the-major-mom-story-columbus

About Major Organizers®
Since 2006, Angela Cody-Rouget, AKA “Major Mom” has employed “Liberators” throughout the United States.

Cody-Rouget continues to expand Major Organizers® through franchising to serve the organization’s mission of restoring order to the world. Major Organizers®, a veteran-owned company, is building a national brand with operations in Alabama, Arizona, Colorado, Illinois, Ohio, and Texas. Cody-Rouget declared her goal for the company: create 500 jobs for women and veterans as well as help military spouses and veterans become business owners.

The Major Organizers® team is comprised of professional organizers who are highly skilled and well trained at de-cluttering and setting up customized, achievable and sustainable systems in various types of households.

The founder and CEO of Major Organizers®, Angela Cody-Rouget, walks her talk. She has two decades of training in order management. She served in the U.S. Air Force for 18 years (10 years active duty, four years in the reserves +4 years in AFROTC) and she embraces and thrives in orderly environments.