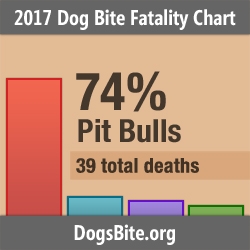 In 2017, rescued or rehomed dogs inflicted 15% (6) of all dog bite fatalities. Pit bulls contributed to 83% (5) of these deaths, including killing a person on the day of adoption. 67% (4) of all deaths involving rescued or rehomed dogs were vetted by an animal agency or foster prior to adoption. 67% also had known aggression or behavioral issues at the time of the fatal attack. In half of all death scenarios, the rescue dog was added to a home that already had one or more dogs.

In 2017, 15% (6) of all fatal dog attacks resulted in meaningful criminal charges, down from the 12-year average of 21%. All cases with criminal charges involved pit bulls, including a case where second-degree murder charges were filed. Ohio led all states in fatal attacks in 2017 incurring 4 deaths. Texas and Georgia followed, each with 3 deaths, and a group of seven states followed, each with 2 deaths: Alabama, Arizona, California, Florida, Illinois, Kentucky and Virginia.

This year's release includes statistics from the 13-year data set (2005 to 2017). During this period, canines killed 433 Americans. Pit bulls contributed to 66% (284) of these deaths. Combined, pit bulls and rottweilers (45) contributed to 76% of the total recorded deaths. When mastiff-type guard dogs and war dogs are added -- the types used to create "baiting" bull breeds and fighting breeds -- this small group of dog breeds accounts for 84% (363) of all dog bite-related deaths.

Discussion Notes examine 2017 trends and revisit two changing metrics since the last U.S. government study years 20 years ago. Adults now account for more deaths than children, rising from 30% to 52% between the two periods (1979-1989 and 2005-2017). The "single dog" metric as the primary killer has fallen from 70% to 53%. Also examined is the "exponential effect," when more than one pit bull is part of a group of 3 or more dogs inflicting a fatal dog mauling.

Multiple charts and graphics are available on the 2017 U.S. Dog Bite Fatality Statistics web page and the adjoining discussion notes blog post, including two charts, 6 and 7-years respectively, showing the rise of pit bull deaths and the fall of rottweiler deaths over a 13-year period; a chart showing the top 7 killing dog breeds since 2005, the number of deaths broken down over 13-years and a 2017 chart showing the disproportionate number of deaths attributed to pit bulls.

DogsBite.org is a national dog bite victims' group dedicated to reducing serious dog attacks. Through our work, we hope to protect both people and pets from future attacks. Our website, www.dogsbite.org, was launched in October 2007 and contains a wide collection of data to help policymakers and citizens learn about dangerous dogs. Our research focuses on pit bull type dogs. Due to selective breeding practices that emphasize aggression and tenacity, this class of dogs negatively impacts communities the most. Our website hosts important dog bite studies, U.S. dog bite fatalities and other key bibliographies. In the Legislating Dogs portion of our site, we offer examples of breed-specific laws (state-by-state) and documentation of the constitutionality of these laws. The Victim Realities section provides a glance into the unforgettable histories victims leave behind and much more. DogsBite.org operates out of Austin, Texas and can be contacted via: 512-650-8510 or press@dogsbite.org. Research contributions and active website participation stems from individuals that span the United States of America and across the world.
Contact
DogsBite.org
Colleen Lynn
512-650-8510
https://www.dogsbite.org