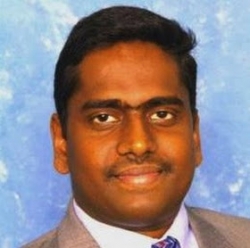 Irvine, CA, June 29, 2018 --(PR.com)-- Pramod Kunju ("Data Guru"), Founder and President of Nakunj Inc., is an authority on Big Data and Artificial Intelligence. Mr. Kunju specializes in Predictive Analytics, the science of predicting future results or behavior based on past performance, and trends. Mr. Kunju is the author of the ground-breaking book, "The Only Customer." Based on the principles of Big Data and Artificial Intelligence, this book uncovers a novel approach to attracting, and retaining customers.

Nakunj Inc. is pleased to announce that Mr. Kunju is releasing his predictions for the 2018 World Cup soccer knock out phase. These predictions are drawn from analyzing each team's performance in the current World Cup so far, and in the past several years.

Here's a look at

Here is a look at how Mr. Kunju's predictions below fared during the finals:

England had a 74% chance of beating Belgium, however, the England team seemed to have lost their appetite for winning after their devastating semi-final loss to Croatia. 3rd place match is a misery for the teams, as well as for the audience, so FIFA may want to consider scrapping this altogether.

France had a comfortable 83% chance of winning against Croatia, and they came through in style with a 4-2 victory.

Here is a look at how Mr. Kunju's predictions below fared during semi-finals:

Belgium was predicted to beat France with a 71% chance, however France won that match. The big difference was Lukaku's performance. The model expected Lukaku to perform like he did in the prior matches. However, he was a non-factor in this game, not taking advantage of the many opportunities to score. The model will be updated in future to take into account Lukaku's tendency to not show up in the big games that matter.

England had a better chance (88%) of beating Croatia, and it seemed like they were cruising to a win with a 1-0 lead until the 68th minute. This game went into extra time, which is where the model's ability to predict the outcome is significantly diminished. Eventually, Croatia's resilience, more than their soccer ability saw them through. The model needs to be adjusted to factor this in.

Here is a look at how Mr. Kunju's predictions below fared during quarter-finals:

Mr. Kunju accurately predicted the outcomes of Crotia vs Russia, and England vs Sweden. Uruguay had a 74% percent chance of defeating France, however, the absence of Cavani, Uruguay's ace striker due to injury tilted the advantage in France's favor. Brazil had a better chance (89%) of defeating Belgium, however Brazil's self-goal is something no predictive analytics tool could factor in.

Here is a look at how Mr. Kunju's predictions fared during pre-quarters. Out of 8 matches, Mr. Kunju predicted 6 correctly. Of the 2 that were incorrect, one (Russia - Spain) was decided on penalties. The other one (Argentina - France) was decided by a 4-3 margin. In other words, the predictions were pretty spot-on.

Below are the original predictions for all knock-out matches:

Whatever be the final result, the 2018 World Cup has already provided soccer fans all over the world with many moments to cherish, and some scintillating goal scoring. Nakunj Inc. hopes that the trend continues in the knock out phase.

Pramod Kunju's predictions are sure to add some spice to watching the World Cup. As an international authority on Big Data and Artificial Intelligence, Mr. Kunju is glad to provide his expertise in the field of soccer, a game he is very passionate about.