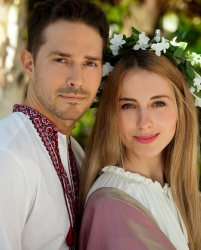 Seattle, WA, July 02, 2018 --(PR.com)-- The Lesser-Known Players’ popular production, Forest Song, which opened to rave reviews last year on Bainbridge Island, made a trip down to Portland, and picked up praise from the Consulate of Ukraine along the way, will wrap up its Pacific Northwest tour with a two-week run July 13-22 at the Erickson Theatre Off-Broadway in Capitol Hill. Tickets are on sale now at: https://forestsong.brownpapertickets.com/

“It is an honor to share this magical work with a wider audience,” said director Jennifer Hodges. "Forest Song’s warm reception, and the enthusiastic support of our sponsors and our community are testaments to the beauty of this play and the timelessness of its message.”

Forest Song, written by female Ukrainian playwright Lesya Ukrainka in 1911, is about a forest nymph, Mavka, who falls in love with a mortal youth, Lukash, and the clash of values and cultures that results from their union. “Forest Song is kind of like one part Midsummer Night’s Dream, and one part Romeo & Juliet, with hauntingly beautiful music and some surprisingly contemporary themes about freedom and conservation of nature mixed in,” said Hodges. An original score by Seattle composer and music director Jon Brenner, written with a nod to Ukrainian folk music and composers, makes Forest Song a draw for music lovers as well as theatre fans.

The production has drawn praise from more distant quarters, as well. The Consul General of Ukraine in San Francisco, Sergiy Aloshyn, surprised the cast and crew at the close of their Portland run with a letter of commendation. “Your exceptional performance gracefully exemplified Ukrainian culture, tradition, and people,” it read. “Furthermore, your portrayal of the characters was transformative and executed with the utmost finesse...It is a true honor that performers such as yourselves were able to bridge our cultures with such grace and appreciation.”

The cast insists it is they who have been honored by the experience. “I love acting, but working on this play, that means more to the Ukrainian people than I may ever understand, has taken this theater experience to a whole new level,” says Jennifer Pippin-Montanez, who plays Lukash’s mother. “Every gesture, every line, is a gift to the audience, and I am humbled to be able to share it with them.”

Hodges, a third-generation Ukrainian American and a longtime fan of the play, spent years searching for a good translation to produce locally. She found one in the translation developed by Virlana Tkacz and Wanda Phipps of Yara Arts Group in New York under a grant from the National Theatre Translation Fund. Yara Arts Group is a resident company at La MaMa E.T.C., recipient of the 2018 Regional Theatre Tony Award.

The Lesser-Known Players is a Bainbridge Island -based 501(c)(3) nonprofit performing arts organization dedicated to bringing lesser-known works of artistic and literary merit to a wider audience, and to fostering connections between the music and theatre communities through collaborative projects and the development of new works.