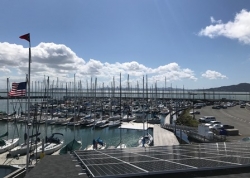 Novato, CA, July 03, 2018 --(PR.com)-- Novato and Sonoma based SolarCraft, a leading North Bay solar installer for over 35 years, recently completed the installation of a 75 kW DC solar system at Richmond Yacht Club in Point Richmond, CA. The system will produce over 50% of the harbor’s projected annual energy needs, saving the Club thousands every month while powering their operations with clean, sustainable electricity.

Using the majority of available roof space, the solar photovoltaic system is mounted on the main club house building, and consists of 208 high-efficiency solar panels, producing 105,706 kWh annually. SolarCraft designed and engineered the system to withstand the challenges presented by the water-front location such as high winds and salt mist corrosion.

Installing solar energy was appealing not only for sustainability, but also to reduce costs on utility bills. SolarCraft’s financing partner provided a pre-paid PPA which reduced the cost of the installation by 15%, and allowed the club to monetize some of the tax credits not available to not-for-profit organizations. Paying only 85% of the system cost with a 9 year loan resulted in positive cash flow starting in year one, and saving the club over $500,000 in utility expenses over the PV system life-time.

Richmond Yacht Club is reducing their operating costs and stabilizing energy expenses for decades to come, and reducing their carbon footprint to help support a healthier environment for its members and the community.

During the life of the system, over 1,790 metric tons of carbon dioxide generated by Richmond Yacht Club’s operations will be eliminated. This impact is equivalent to removing air pollution produced by 5 million miles of driving over 25 years or the pollutants removed by 93 acres of trees in one year. The nearly maintenance-free system should pay for itself within 5-6 years, and last over 30 years.

About Richmond Yacht Club
In 1932 a group of Richmond locals joined forces to form the Richmond Yacht Club. United by a common desire to promote affordable sailing, they built their own boats, sewed their own sails, constructed their own club house, and ran their own races. 80 years later, RYC continues these traditions as a volunteer yacht club and has grown into a major force in the Bay Area sailing scene.

SolarCraft is 100% employee-owned and one of the largest green-tech employers based in the North Bay for over 35 years. SolarCraft delivers Clean Energy Solutions for homes and businesses, including Solar Electric, Solar Pool Heating and Battery/Energy Storage. With over 7,000 customers, our team of dedicated employee-partners is proud to have installed more solar energy systems than any other company in the North Bay. www.solarcraft.com.
Contact
SolarCraft
Kim Burnett
415-382-7717
www.solarcraft.com