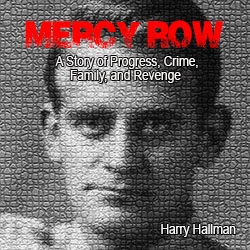 Philadelphia, PA, July 31, 2018 --(PR.com)-- When Harry Hallman or Buddy as his family called him, was growing up during the 1940s and 50s in the blue-collar section of Philadelphia known as Kensington, he never dreamed that he would be the author of four novels about his hometown and its infamous Irish gangsters. Throughout his childhood, he had heard stories about the North Philly Irish gangs. And while he had no aspiration to live a life of crime, he found the stories fascinating.

The Irish gangs took on almost mythical attributes as stories spread about their exploits. In Kensington, the Irish Gangs were as Philadelphia as cheesesteaks, hoagies, scrapple and soft pretzels. In 1959, a story began to spread around North Philly about how the Irish gang, locals called The K&A Gang, perpetrated a caper that seemed as if it came right off the screen of a Hollywood movie. A crew from the gang robbed a Pottstown coal company executive, taking over $478,000 in cash and jewelry. That’s the equivalent of about $4 Million in 2018 dollars. The robbery was reported to have been instigated by a Philly showgirl the press dubbed Tiger Lil. What followed was years of court cases, two of the crew were found dead, Tiger Lil was convicted, and subsequently, that conviction was overturned.

Hallman remembers asking his father, who owned and operated a poolroom on Allegheny Avenue, who these robbers were. “He just looked at me and said, just some guys that hang out at K and A (Kensington and Allegheny Avenues). People just didn’t talk much about the specifics of the gang's exploits. I spent a lot of time in my dad’s poolroom and met many guys who hung out at K and A. When I was a little older I realized many were actually part of the infamous K and A Gang,” Hallman said.

“I always wanted to write a novel but never had the time. When I sold my company, I realized I had no excuse. I searched for a topic, and it always came back to Philly. I loved my childhood in Kensington’s rough and tumble streets and decided whatever I wrote it would be about Philly, and it would be action-oriented. It was natural that I choose Irish mobsters to write about. Philly has always lived in the shadow of NYC, and I wanted to put a spotlight on the city and the area where I grew up,” Hallman said.

Hallman decided to write about a family that headed the Irish gangs of North Philly. His first novel is titled "Mercy Row" and takes place in the 1920s and 30s. It heralds the beginning of a powerful Irish criminal family. “My novels are pure fiction, but when I describe Philadelphia, it is all fact. The Street names are all real, as are any historical events. I was surprised that I received many compliments from Fellow Philadelphians saying my book reminded them of their childhood. It was very gratifying,” Hallman said.

The second book in the Mercy Row series, "Mercy Row Clann," is about the war years 1943 and 44. The family fights two wars, one at home and one in Europe and the Pacific. Book three, "Mercy Row Retribution," finds the grandson of the leader of the gang serving in the military in Vietnam. He’s a pilot flying covert missions and devises a way to export large quantities of marijuana for distribution in the USA.

“I wrote the fourth Mercy Row novel titled 'The Potato Thief' as a prequel. There was a character in the first book that intrigued me. I wanted to see how he got to Philadelphia from his home in Ireland and how he met the father of the man who would become the leader of the Irish Gang of North Philly. It turned out to be an epic taking him on an action-packed adventure around the world before he settled in Kensington,” Hallman said.

Hallman is currently writing a fifth Mercy row novel. This one takes place in the late 1980s. He promised it to be every bit the action-packed adventure as the previous novels.

The Mercy Row series including the prequel, "The Potato Thief" are available on Amazon.com (www.amazon.com/default/e/B00J606XOW/) in print, eBook and audiobook formats.
Contact
Octane
Harry Hallman
404-664-5664
www.mercyrow.com