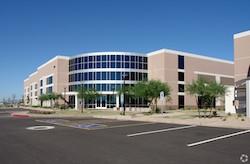 The property, which is located near the Chandler Municipal Airport, will serve as Offerpad’s permanent headquarters when the company moves in early next year. The nearly 40,000-square-foot space will meet the demands of an ever-growing staff.

“To watch this all come together has been exciting,” Milne said. “I’ve been working with the Offerpad founders since the beginning, and I’ve enjoyed getting to grow with them. I’m excited to see what they do next.”

Milne first worked with Offerpad when the company moved into its current offices in Gilbert. He was also involved with the opening of Offerpad offices in cities such as Atlanta, Las Vegas and Orlando. Since its inception in 2015, Offerpad has participated in thousands of real estate transactions and is projected to purchase and sell $1.5 billion in single-family homes over the next year.