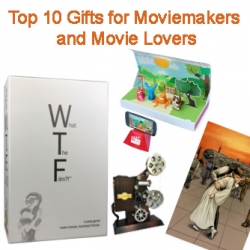 1. What The Film?! – $24.99 – a party game. Make movies; Backstab friends. This new-to-the-market game was created by two guys helping others clean up from Hurricane Irma. Combine an Actor, Plot and Set card to create a hilarious movie. Vote for a favorite movie idea, or merely backstab for the win. Recently seen in celebrity swag bags at Hollywood Game Night on NBC, it’s now available exclusively at Target.

2. Scratch-Off Bucket List Movie Poster – $24.95– It’s a poster of 100 images of movies every cinefile should see. Covering 1933 to 2014, movies range from the original King Kong to Back to the Future to Boyhood. There are a number of different kinds but this artsy version by SolartUSA wins out because it looks good before and after the scratch-off. Available at Amazon.

3. An Authentic Clapboard – $19.99 – Forget the black and white clapboards sold at a movie-themed park, this clapboard is the real, full-color, whiteboard deal. Write a message to a client, cast or crew and call it a wrap. Available at BHPhotoVideo.com.

4. Stop Motion Claymation Kit – $20.00 – While never having a desire to create stop motion, when forced to create a student project in a film class, it ended up as a favorite project. There’s a DIY stop motion kit that makes for a super cool, unique gift. Available at UncommonGoods.com.

5. Pocket Projector – $179.99 – With a phone in one pocket and the projector in the other, movie lovers will be able to watch a movie wherever there is a blank wall, ceiling or flat space. Rechargeable and with both a built-in speaker and an audio out, this mini-projector solves one of the biggest previous issues...weak audio. Available at Amazon.com.

6. Warner Bros. Studio Tour Tickets (Los Angeles and/or London) – $49.99+ - Most know about a Universal Studios tour, but many are unaware that Warner Bros. has a tour of their own. The Hollywood tour features current show soundstages to Batmobiles to the Friends café while the London tour is all things Harry Potter and not just worth the price of admission, but worth taking a trip to London merely for the tour. Tickets and gift certificates are available at WBStudioTour.com.

7. Retro Cinema Blanket featuring Star Wars – $19.99 – Movie favorites are always subjective so we’ve tried to exclude movie specific ideas. But this one is so cool and unique, it has been included even though it singles out a movie. And, hey, it’s Star Wars! Available at Target.

8. Film Reel Accent Table – $59.00 – While giving a table as a gift is a little unconventional, it makes a film statement! It’s a rustic blend of a film reel and a tripod, a subtlety probably lost on those outside of the industry, but cool nonetheless. Available at Amazon.

9. Vintage Film Projector Music Box – $15.99 – It’s got a great look and cool concept of both a music box and a jewelry box, but “you may get what you pay for.” It’s a cheap item, it looks great, but some reviewers have said it breaks easily. Available at Amazon.