City of West Melbourne Issues Proclamation for October 25th as Pasta Day, and Honors the Pasta Industry and DEMACO 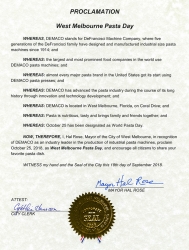 During the city council meeting on October 2, Mayor Rose honored the pasta industry and DEMACO. DEMACO started building pasta machines in 1914 as I. DeFrancisci & Son, and is now headquartered in West Melbourne. The proclamation recognizes DEMACO as "advancing the pasta industry during the course of its long history through innovation and technology development."

Mayor Rose also recognized pasta as, "nutritious, tasty and brings family and friends together." He also said he is proud that West Melbourne is the home of a company directly involved in this important industry.

In honor of West Melbourne Pasta Day, Riviana Foods of Houston, Texas, a major producer of pasta, will donate several cases of Ronzoni Garden Delight brand pasta to the Daily Bread. Garden Delight pasta is made on a DEMACO extruder.

WHEREAS: DEMACO stands for DeFrancisci Machine Company, where five generations of the DeFrancisci family have designed and manufactured industrial size pasta machines since 1914; and

WHEREAS: the largest and most prominent food companies in the world use DEMACO pasta machines; and

WHEREAS: almost every major pasta brand in the United States got its start using DEMACO pasta presses; and

WHEREAS: DEMACO has advanced the pasta industry during the course of its long history through innovation and technology development; and

WHEREAS: DEMACO is located in West Melbourne on Coral Drive; and

WHEREAS: Pasta is nutritious, tasty and brings family and friends together; and

WHEREAS: October 25 has been designated as World Pasta Day.

NOW, THEREFORE, I, Hal Rose, Mayor of the City of West Melbourne, in recognition of DEMACO as an industry leader in the production of industrial pasta machines, proclaim October 25, 2018, as West Melbourne Pasta Day, and encourage all citizens to share your favorite pasta dish.

WITNESS my hand and the Seal of the City this 18th day of September 2018.