World Famous Randy's Donuts Opens on Hollywood Blvd. December 10th; The Hollywood location will have a giant 18” wide donut that guests walk through to enter the store, a signature Hollywood Star shaped donut and a Pop Culture wall 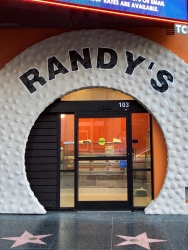 For over 50 years, Randy’s Donuts prides itself on using only the finest baking ingredients in the world to make each donut by hand daily. Expert bakers combine secret mixes to produce donuts that are fluffier, airier, larger, and stay fresh longer. “We never skimp on icing, glaze, sprinkles, or other decorations,” says Mark Kelegian, CEO and owner of Randy’s Donuts. “We go over the top to put as much chocolate, maple, cream filling, or other toppings as the donuts can possibly hold.” Randy’s Donuts also offers a great value for families and businesses with glazed donuts, twists, chocolate raised, cinnamon rolls, apple fritters, and more priced at or below the competition.

Randy’s Donuts joins Hollywood & Highland’s diverse list of new tenants, including Japan House Los Angeles, Foot Locker with Six:02, and Quay Australia along with other contemporary fashion and beauty brands, boutique cafes, eateries and entertainment attractions. Hollywood & Highland also recently introduced the VIP ACCESS card, which extends discounts to 18 of the center’s retailers and is available to all guests upon request at the Visitor’s Center on Level 2.

About Randy’s Donuts
Randy’s is widely recognized as one of the most iconic locations in Los Angeles attracting visitors from around the world to take pictures of the giant rooftop donut and enjoy the best donuts in the world! Always a line, but always worth the wait!

No doubt you immediately recognize the landmark building from its many appearances in movies such as: Iron Man II, Entourage, Dope, Californication, California Girls, 2012, Earth Girls Are Easy, Mars Attacks!, Volcano, Get Shorty, Crocodile Dundee in Los Angeles. Randy’s Donuts is also well known for its references and appearances on Tonight Show with Jimmy Fallon, Big Bang Theory, The Simpsons, Arrested Development, Victorious, and many others. It is also featured in music videos including Randy Newman’s “I Love L.A.”, Red Hot Chili Peppers’ “Californication,” and Becky G’s “Becky from the Block.”