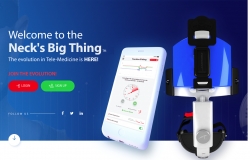 CerviFit, which takes its name from combining cervical and fitness is currently covered through most workman’s comp, Personal Injury Protection insurances and available to both the military and VA through GSA Advantage. The system has been prescribed for such common musculoskeletal disorders as neck pain, headaches and tingling or numbness in the hands or lower extremities, often referred to as neuropathy. The system which is prescribed for 10 weeks, affords the patient the opportunity of rehabilitating in the familiar comforts of their home on a schedule that fits today’s busy lifestyle rather than enduring time-consuming trips to conventional physical therapy. Born out of the need to provide physical therapy to deployed military personnel in remote forward positions such as on an aircraft carrier in the middle of the sea or a tent in Iraq, the product is seeing promise in providing relief to rural veterans here at home. According to a May 20, 2013 article in the Minnesota Public Radio News, VA doctors saw a 129 percent increase in neck disorders year over year.”

While the word epidemic is not, or should not, be used lightly, a recent article which appeared in the Guardian on February 10, 2017 entitled “Epidemic of untreatable back and neck pain costs billions,” outlines the reason why that word is appropriate in this case. Based on a study by the Institute of Health Metrics and Evaluation (IHME) at the University of Washington, the rising bill for treatment in the United States of neck and lower back pain was $88.1 billion, a close third behind heart disease at $87.6 billion which infamously occupies the second spot.

The patented CerviFit system which was aptly described as looking like a “Spartan Warrior helmet” by Stack magazine for its appearance, has been embraced by former Naval Top Gun pilots, Marines and ordinary professionals for its comfortable, intuitive design and most importantly the physical outcomes which, for most, is nothing short of miraculous. The first patient, a former Marine whose time spent lifting the 100-pound projectiles into the breach of the largest mobile cannon, the Howitzer, left him with debilitating pain and the subject of Plantation, Fl Neurologist and Anatomical Architect’s Chief Medical Officer, Dr. Jeff Steinberg’s white paper outlining the patient’s care and outcome. The paper concluded, “...from the elimination of migraines and physical pain, the CerviFit program allowed him to return to his traditional daily activities including weight training and martial arts.”

Concluding, CEO Alan Philipson defines the core edict of his company. “It is incumbent upon both patient and physician to explore objective and pragmatic alternatives that results in better health and an improved life. As Abraham Lincoln once prophetically observed, “a house divided cannot stand.” Similarly, the human body that is based on an interdependent muscular-skeletal system, cannot function divided. By innovating in the field of physio-medicine, we can focus on the root cause of the pain and discomfort providing a clear and consistent path to a healthier, pain-free and fulfilled life.”