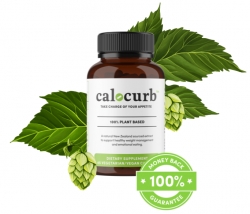 Auckland, New Zealand, May 31, 2019 --(PR.com)-- The ground-breaking plant-based dietary supplement calocurb™ is rapidly expanding internationally. Last week Iceland joined the list of countries that the supplement is now available in, which includes the United States, China and New Zealand. According to calocurb’s maker – LifeStream – there are plans to launch in Vietnam, Mexico and Malaysia very soon. This news comes on the heels of calocurb receiving phenomenal reviews worldwide and positive study findings:

Positive Independent Reviews
Becca Ludlum from My Crazy Good Life covered calocurb in a piece called “Reasons I Use This Natural Weight Management Supplement.” She writes that, while she was sceptical at first, she decided to try calocurb after learning that it had only three plant-based natural ingredients.

After a week or so of using the product, Becca describes, “I notice that I feel less hungry, that is all. Being less hungry definitely makes me think about food less, which allows me to feel more in control of what I eat.”

Becca also happily adds that there were no side effects, especially considering a drop in her blood sugar levels generally triggers a migraine, and that calocurb helps her stay on track on her diet.

The lifestyle site, On Better Living also shared a similar set of results in their post called “Say Goodbye to Cravings with This 100% Plant-Based Supplement.”

After taking calocurb for three consecutive nights, they write, “calocurb definitely seems to be curbing my hunger in the evening. I haven’t snacked at all and I’ve increased the duration of my fast from 16 to 18 hours... I feel satiated throughout the night without nausea or the jitters.”

Positive Study Findings
The supplement itself is being regarded as a breakthrough in the war against obesity in light of positive study findings.

It has taken the team six years to identify the plant and develop the extract for clinical testing said study lead Ingram, who presented the findings of the study at a European Obesity Summit in Sweden last month.

Calocurb
Calocurb launched New Zealand and the US last year and is a 100% plant-based dietary supplement that supports weight management and appetite control in an organic and natural manner.