The Arab American Cultural Society would like to extend a warm welcome to the Dallas/Fort-Worth Metroplex to their much anticipated upcoming Third Annual Arab Texas Festival. This will be an open event to all of our neighbors in the community. 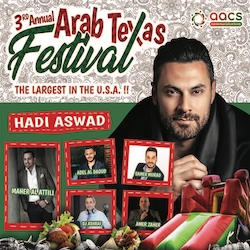 The Arab American Cultural Society (AACS) would like to extend an invitation for you to join their 3rd Annual Arab Texas Festival. The AACS is a not for profit organization that will serve to strengthen and support the Arab American interests in the United States. AACS aims to promote a more positive cultural environment surrounding the Arab American Community.

One of the main goals of AACS is to raise awareness and knowledge of the Arab culture to the American public.

The event will be open to the entire community regardless of race, religion, national origin, sexual orientation or any disability. Last year’s event attracted nearly 10,000 patrons and they expect well over 10,000 guests from all over the U.S. and some from overseas.

The event will be held at a bigger venue because of the growing number of attendees, which will include a special Kids Zone for children, Amusement Style Rides, Petting Zoo, Pony Rides, Miniature Train Rides, and many Sport Games and activities for all ages.

This year’s event will consist of many top Arabic Entertainment acts, including Arab Superstar Hadi Aswad and will feature over half-dozen of the DFW Area’s Best Mediterranean Food Vendors, Various Exhibitor’s Tents, plus a Cultural Fashion Show, Various Arab Cultural Exhibits, Middle-Eastern Cultural Folk Dances from many different dance troupes from different Arab regions. They will also have various food eating contests, raffles, henna artists, guest speakers, and we have confirmed a number of distinguished congresswomen, including mayors, political figures, and state representatives from across the metroplex.