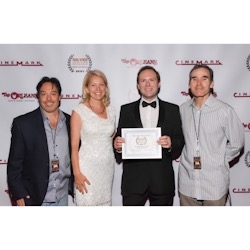 It is special moment for Arek Zasowski as “Let Go: The Prelude” is the very first short film that Arek wrote and directed: “Therefore winning Best Inspirational Short award and seeing it screened on a big screen, our US premiere in Nevada, at such a prestigious location in Las Vegas - the Century Orleans 18 and XD Movie Theatre at the Orleans Hotel & Casino Las Vegas, is definitely special in my acting and filmmaking career,” Arek chuckles.

In “Let Go: The Prelude” Arek Zasowski portrays the lead character, an adventurer archaeologist Henk, who, after losing his fiancée in a tragic accident, is struggling to recover and return to his normal life as nothing is the same anymore.

The film explores Henk’s emotional side, his sensitivity, his longing and deep love to Tiffany that does not go away, and tries to find an answer to a more general question that we all may experience in our life at some stage, how can we cope after losing someone dear that we truly love?