Tonia DeCosimo Devotes the Fall 2019 Issue of P.O.W.E.R. Magazine to Women Who Have Cancer and Cancer Survivors in Honor of Breast Cancer Awareness Month 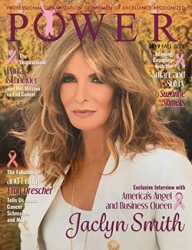 Manhasset, NY, September 26, 2019 --(PR.com)-- Tonia DeCosimo, founder and editor-in-chief of P.O.W.E.R Magazine has devoted the fall 2019 issue to women who have cancer and cancer survivors in honor of Breast Cancer Awareness Month. The Professional Organization of Women of Excellence Recognized and powerwoe.com are proud to showcase these cancer survivors who did not allow this disease to stop them from pursuing their goals and dreams.

About The Courageous Cancer Survivors of P.O.W.E.R.
Many of the courageous women highlighted in the fall issue of P.O.W.E.R. Magazine and powerwoe.com have stated that being a survivor led them to start or join foundations or write books to help others fight the fight.

Jaclyn Smith, the cover girl, is an award-winning actress, designer, businesswoman and role model. Her breast cancer was found through her yearly mammogram and led to a lumpectomy and radiation in 2002. She remains vigilant about her follow-up care. Jaclyn says her family has served as her inspiration. She stresses that no one should go through cancer alone.

Actress, director, producer and philanthropist Fran Drescher is a 19-year cancer survivor, having been misdiagnosed for two years by eight doctors. Fran wrote her book, “Cancer Schmancer,” founded the Cancer Schmancer Movement whose mission is to educate, prevent and activate patients and was instrumental in passing the Gynecologic Cancer Education and Awareness Act of 2005.

In 2001, Suzanne Somers, actress, author, singer, businesswoman and health advocate, was diagnosed with breast cancer, had a lumpectomy and radiation, but declined to undergo chemotherapy. After being misdiagnosed with inoperable cancer, she interviewed doctors about cancer treatments and those interviews became the basis of her controversial book, “Knockout,” about alternative treatments to chemotherapy.

Paula Schneider is the president and CEO of Susan G. Komen®, the world’s largest breast cancer organization. She is a breast cancer survivor, diagnosed in 2007, who lost her mother to metastatic breast cancer in 2010. She is determined to do all that she can to build on this iconic organization’s mission to end breast cancer.

Charlotte (Char) L. Murphy is a non-practicing attorney, four-time breast cancer survivor, inspirational author, motivational speaker, entrepreneur and the founder of BelieveInspire. After running a successful law firm for 15 years, Char became ill with cancer. Despite the years of treatment and difficulty, the upside is that it led to her current career. As the Founder and Owner of Barbara’s Hair Studio, Barbara Vivolo has complete empathy for her customers. She understands what it’s like to face breast cancer and deal with the physical and emotional results since she herself is a survivor. Barbara started styling wigs for her mother and aunt who were diagnosed with breast cancer and underwent chemotherapy treatment. She wanted to help ease the trauma they felt due to hair loss from chemotherapy treatments. This became her life’s mission and passion. Along with cancer survivors, P.O.W.E.R. is always proud to feature women in all industries and professions who empower and inspire us every day.

Also included in the fall issue of P.O.W.E.R. Magazine is a detailed list of cancer assistance contacts for all different needs which includes phone numbers, websites and helpful information. There is so much that is still unknown about cancer and not every type has recognizable symptoms. Through this issue, it is P.O.W.E.R’s goal that if you feel something is not right with your body, you will keep asking questions, pursue testing and learn all you can from survivors.

About P.O.W.E.R. Magazine (Professional Organization of Women of Excellence) and Powerwoe.com
P.O.W.E.R is an online community as well as a digital and exclusive print magazine featuring celebrities and everyday hardworking professional women. Our mission is to provide a powerful network of empowering women who will mentor and inspire each other to be the best they can be. Through our valuable services, our members can network, collaborate with like-minded professionals, gain recognition and obtain knowledge from those who have already achieved success.
Contact
P.O.W.E.R. (Professional Organization of Women of Excellence Recognized)
S. K. Koop
516-365-3222
www.powerwoe.com
Ellen Gold