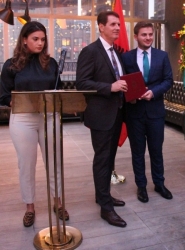 Active in many fields, Marinaj received the title for his contribution to Albanian and world literature and culture through poetry, prose, journalism, literary criticism, philosophy and academic teaching.

Marinaj launched his original philosophy, "Protonism Theory," as a form of literary criticism that aims to promote peace and positive thinking. Already taught in European universities, Protonism and its practice are central to Marinaj's recognition and goals in cultural diplomacy.

The writer spoke of his awarded title as a "great honor," a "ladder to a higher level of moral and literary life," and a "secret key to the great gates of the literary civilization that keeps us human."

"Being worthy of such an honor is essential to my mission for the betterment of humankind," Marinaj said. "Cultural diplomacy seems ever more important."

The Sept. 22 reception, held at New York's Kimberly Hotel and Suites, was organized by the Albanian Embassy in conjunction with Albania's Ministry of Diaspora and office of the Prime Minister.

At the reception, Marinaj was presented with the award by Albania's Minister for Europe and Foreign Affairs, Gent Cakaj. Also present were the Foreign Minister of the Republic of Kosovo, Behgjet Apcolli, along with a range of other European political and literary figures.

Ambassador Floreta Faber and First Secretary Etleva Dore of the Albanian Embassy, Washington, D.C., helped organize the New York event as well as the relay of the award from overseas.

Earlier this year, Prime Minister Edi Rama and former Prime Minister Pandeli Majko preliminarily granted the title to Marinaj in absentia. The writer was asked to receive the award at the second Summit of the Albanian Diaspora, held in March in his home country's capital, Tirana. A prior official engagement, supporting cultural diplomacy in Vietnam, kept him from returning to Albania for the ceremony. Instead, Marinaj received the Nation's Ambassador title in New York at the recent government-sponsored event.

Marinaj also serves as the director of Mundus Artium Press, a world literature publisher founded in 1967.

Ismail Kadare (International Booker Prize, 2005) calls Marinaj "one of the most distinguished Albanian poets of our time" and "among Europe's best poets."

Poet Frederick Turner notes that Marinaj "show us a way of seeing the world...that reveals how very much we are still in the first hopeful dawn of human civilization."

Charlotte Karam, writing for Translator, calls Marinaj an "Albanian-American icon" and a "poetic genius... With a mere pen, this one person has done more for Albanian society than any politician has ever dreamed of doing. Watch him grow."
Contact
MAP
Darla Spek
(972) 851-1084
mundusartiumpress.org