Love Tugboats? Get the New Book: "Tales from a Tugboat Captain" by Thomas Teague

Stories of adventures onboard tugboats as told by a real captain. 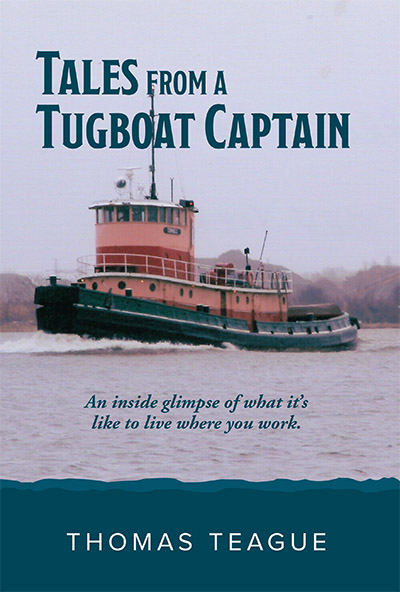 Elkton, MD, January 09, 2020 --(PR.com)-- Many people are fascinated by tugboats and imagine what it must be like to work on the water. Captain Thomas Teague takes readers inside the world of tugboats in a new collection of stories about his adventures onboard titled, "Tales from a Tugboat Captain."

Entertaining and informative, Teague tells how he got started in the tugboat industry even though he planned to join the military. There are funny stories told in the captain’s unique style about some of most colorful characters he has met in his career from deckhand to captain, from Delaware to the Gulf of Mexico and back.

Readers will get an inside look at life onboard a tug, including learning the ropes (literally), deciphering industry jargon, and the dangers that crew members face on every deck. There’s even a true story of survival. This book is for everyone who is interested in tugboats and those who like a good story. "Tales from a Tugboat Captain" is available on Amazon.

Commenting on the book, Teague said, “I’ve worked on tugboats for more than 45 years. The industry has changed a lot but still, it’s a whole different world. I hope people enjoy this first book in the series. I have a lot more stories to tell.”

About Captain Thomas Teague
Captain Thomas Teague began his career in the marine transportation industry when he acquired a full-time job as a deckhand on a tugboat in 1974. In 1976, Teague obtained his first USCG license as Operator of Uninspected Towing Vessels Less than 200 Gross Registered Tons Upon Near Coastal Waters. This license, along with receiving two years training in the wheelhouse of a tugboat, proved that he had the skills and qualifications needed to be promoted to a mate’s position. Teague’s first command as Captain was aboard a single screw railroad tugboat. He has upgraded his license several times since then.

Currently, Captain Teague is licensed by the USCG as Master of Self-Propelled Vessels of Less Than 1600 Gross Registered Tons Upon Oceans and Master of Towing Vessels Upon Oceans and Western Rivers. Captain Teague’s credentials have been evaluated by the USCG and he is qualified for continuing recognition as a Designated Examiner for assessment of competence of candidates for towing vessel licenses.

Captain Teague has many stories of his adventures at sea and enjoys sharing them, especially with people who love tugboats. He resides in Maryland with his wife, Betty.