Los Angeles, CA, February 14, 2020 --(PR.com)-- Thoughts become things - at least that what has been proclaimed in film like The Secret and in other law of attraction teachings. But how do our thoughts become things? What is the process to follow and how can one use this information with any certainty of result?

An upcoming film is ready to unfold the answers. In his fourth personal development film, Douglas Vermeeren shares the answers behind How Thoughts Become Things. In this film, Vermeeren, along with a familiar cast of Bob Proctor, John Demartini, Joe Vitale, Marie Diamond, John Assaraf, Bob Doyle and others of Secret fame unfold the mysteries of thought. This cast is added by a few newcomers: Travis Fox, Karen Perkins and Marina Bruni.

The film promises to be a powerful addition to the conversation begun in 2006 with the release of “The Secret.” Yet as Vermeeren states, “This film will share the 'How,' which is the process. And the word 'Become' in our title is also important. This implies a change of state from where you are now to where you would like to become and what you would like to create.”

“How Thoughts Become Things,” the film, will screen at a variety of locations around the world beginning in April. “Many of these events have been sold out since July of 2019,” revealed Rachel Dobson, a member of the film's marketing and promotion team. Several of the cast and thought leaders from the film will be touring with the film at these live events. Tickets can be obtained at www.HowThoughtsBecomeThings.com in late March.

It is anticipated that the film will be available online later this year.
Contact
Jared Vermeeren
1 (403) 714-5191
www.howthoughtsbecomethings.com 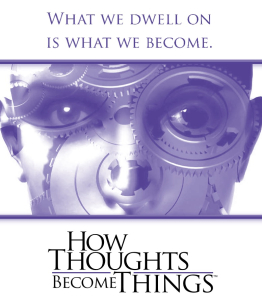