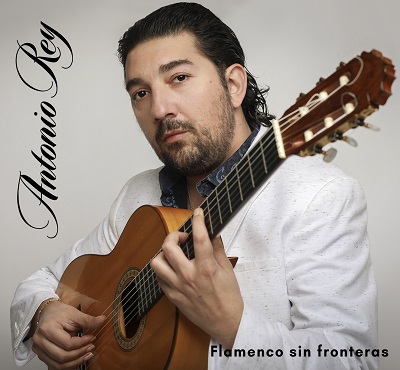 El Cerrito, CA, March 09, 2020 --(PR.com)-- On March 27, 2020, El Cerrito Records will release “Flamenco sin fronteras,” an album by award winning, extraordinary Flamenco guitarist, Antonio Rey. A tour has been scheduled to promote this album from March to May 2020, throughout the west and the east coasts of the United States.

"Flamenco sin fronteras," makes reference to Antonio Rey’s flamenco origins and his parallel destiny as a universal musician. Recorded in Jerez, and mixed and mastered in the San Francisco Bay Area, this CD reunites old companions and includes the stellar collaboration of two of the top vocalists from Spain: Pablo Alborán, who appears as a courtesy of Warner Music Spain S. L., and El Barrio.

A staunch defender of the solo guitar tradition, Antonio Rey moves freely between Farruca, Alegrías, Fandangos, Soleá and Rumbas, and of course, Bulerías. In this album, Antonio Rey honors his great icons Paco de Lucía, Vicente Amigo, and Rafael Riqueni, among other great guitar lineages of Jerez itself; and his own father Tony Rey, from whom Antonio inherited his mastery.

Antonio Rey aims to convey, in flamenco language, the breathtaking beauty of the Andalusian soundscape. At the same time, he is a true ambassador of the Flamenco genre in the world; hence the title of this album that translates into “Flamenco without borders.”

The first single that will be released from “Flamenco sin fronteras” is “Un Sueño Contigo Alma,” written in collaboration with Pablo Alborán. Other suggested tracks are Ximena and Frente al Mar – Dedicada a Paco de Lucia (dedicated to Paco de Lucia).

Physical and digital copies of “Flamenco sin fronteras” will be available on March 27, 2020 on Amazon and all the main online stores and streaming services such as Tidal and Spotify.