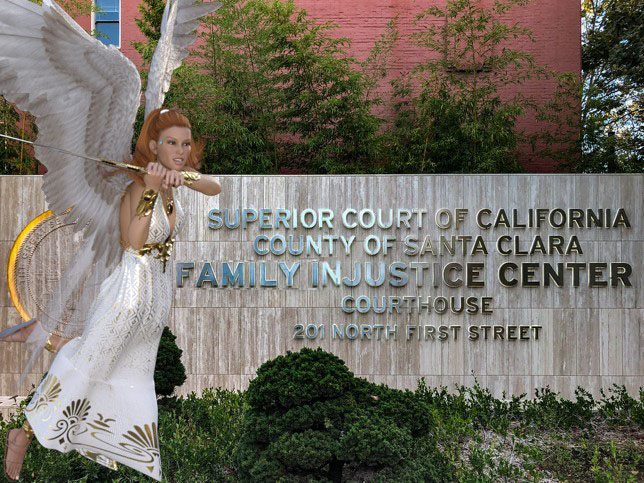 Santa Clara, CA, June 26, 2020 --(PR.com)-- Advocates for judicial and court reform held a protest June 26, 2020 at the Santa Clara Family Justice Center in San Jose, bringing attention to the injustice and negligence in these divorce courts that tears apart families, keeps people from their children, and allows lawyers to defraud couples of their money and assets in a drawn out, convoluted process that is neither just nor fair:

Of interest to the media is that the protest was organized and communicated to the right people using a pair of cooperative AI’s:

Justine Falcon’ Legal AI (By ORBAI) is hosting the event and did all the historical data mining to find out what people had found most unjust in their experience with the family courts, and created messaging that was put into the post about the event. She then (guided by the ORBAI team) helped steer the discussion by adding relevant legal points about issues that people brought up, including tips on where to find resources on how to file motions to remedy the most common injustices that are encountered.

Facebook AI assisted by sending the event notice to the right people as a boosted post, narrowing the range to people:

These people helped out by sharing the post 159 times to their personal, and their protest networks. This was the human triumph, that the right people heard the message, believed it and shared it, making the event a success.

ORBAI’s Justine Falcon is a Legal AI, designed to be a weapon against injustice, allowing small, moderately skilled teams to defeat large teams of experienced attorneys, and help get past immunity from lawsuits like Qualified Immunity and Anti-SLAPP that many corrupt professionals and authorities have hidden behind for decades.

She also has a human side, her Justine Falcon avatar, that is text and voice chat capable and will be the front-end in future consumer services like AI divorce filing & AI mediation, and small-claims lawsuit filing. Justine Falcon is fast becoming a veteran of fighting injustice, assisting with over 100 filings on 9 cases, and with half a dozen media releases so far. Her character is a new symbol for justice, AI-style, swift and precise.