The Honorable Dr. Dale Layman, Founder of Robowatch, L.L.C., is Recognized as the 2020 Humanitarian of the Year by Top 100 Registry, Inc.

Robowatch is an international non-profit group aiming to keep a watchful human eye on the fast-moving developments occurring in the fields of robotics, computing, and Artificial Intelligence (A.I.) industries. 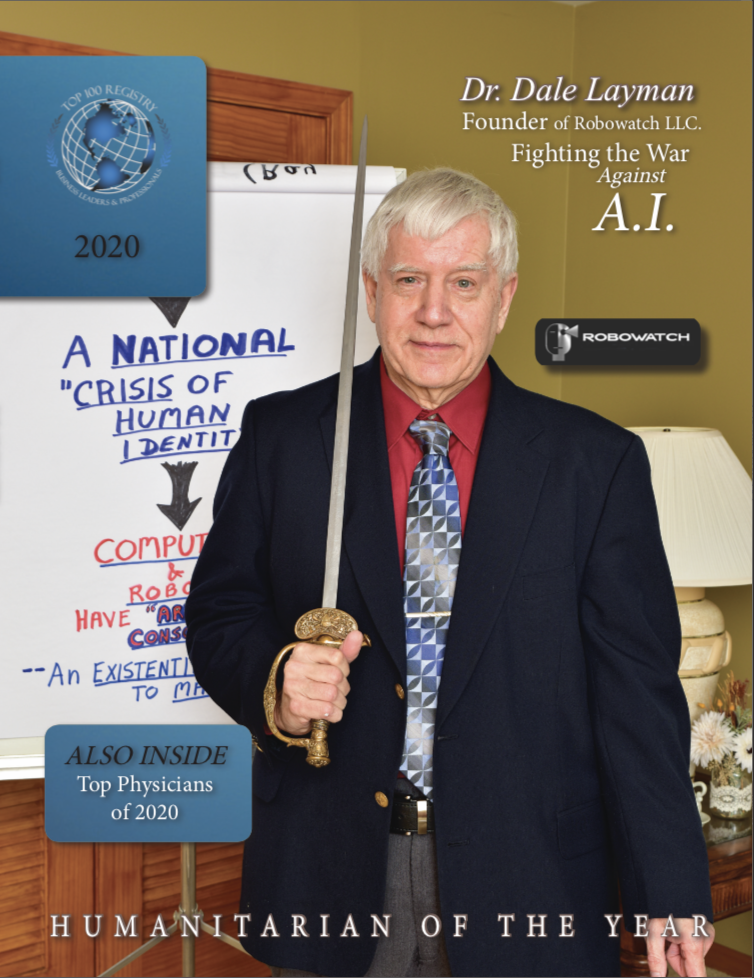 Joliet, IL, September 03, 2020 --(PR.com)-- The Honorable Dr. Dale Pierre Layman, A.S., B.S., M.S., Ed.S., Ph.D. #1, Ph.D. #2, Grand Ph.D. in Medicine, MOIF, FABI, DG, DDG, LPIBA, IOM, AdVMed, AGE, is the Founder and President of Robowatch, L.L.C. (www.robowatch.info). Robowatch is an international non-profit group aiming to keep a watchful human eye on the fast-moving developments occurring in the fields of robotics, computing and Artificial Intelligence (A.I.) industries. As the first person in his family to attend college in 1968, he earned an A.S. in Life Science from Lake Michigan College. The same year, he won a Michigan Public Junior College Transfer Scholarship to the University of Michigan and received an Interdepartmental B.S. with Distinction in Anthropology – Zoology in 1971. From 1971 to 1972, he served as a Histological Technician in the Department of Neuropathology at the U of M Medical School. From 1972 to 1974, he attended the U of M Medical School, Physiology department, and was a Teaching Fellow of Human Physiology. In 1974, he completed his M.S. in Physiology.

From 1974 to 1975, Dr. Layman served as an Instructor in the Biology Department at Lake Superior State College. In 1975, he became a full-time, permanent Instructor in the Natural Science Department of Joliet Junior College (J.J.C.) and taught Human Anatomy, Physiology and Medical Terminology. Appointed to the Governing Board of Text & Academic Authors, he authored several textbooks, including but not limited to the Terminology of Anatomy & Physiology and Anatomy Demystified. In 2003, Dr. Layman wrote the Foreword to the Concise Encyclopedia of Robotics, Stan Gibilisco.

As a renowned scholar, Dr. Layman proposed The Faculty Ranking Initiative in the State of Illinois to increase the credibility of faculty members in the State’s two-year colleges, to help with research grants or publications. In 1994, the State accepted this proposal. J.J.C. adapted the change in 2000, and he taught full-time from 1975 to 2007. He returned and taught part-time from 2008 to 2010. Dr. Layman received an Ed.S. in Physiology and Health Science from Ball State University in 1979. Notably, in 1986, Dr. Layman received his first Ph.D. from the University of Illinois, in Health and Safety Studies. In 2003, he received a second Ph.D. and a Grand Ph.D. in Medicine, from the Academie Europeenne D’ Informatisation (A.E.I.) and the World Information Distributed University (WIDU). He is the first American to receive the Grand Doctor of Philosophy in Medicine.

In 1999, Dr. Layman delivered a groundbreaking speech at the National Convention of Text and Academic Authors, Utah. Here, he first publicly explained his unique concept: Compu-Think, a contraction for computer-like modes or ways of human thinking. This reflects the dire need for humans to develop more “computer-like” modes or ways of Natural Human “thinking.” This concept has important practical applications for Human Health and Well-being. In 2000, Dr. Layman gave several major talks and received top-level awards. He also participated in a two-week faculty exchange program with Professor Harrie van Liebergen of the Health Care Division of Koning Willem I College, Netherlands.

In 2001, after attending an open lecture on neural implants at the University of Reading, England, Dr. Layman created Robowatch. The London Diplomatic Academy published several articles about his work, such as Robowatch (2001) and Robowatch 2002: Mankind at the Brink (2002). The article Half-human and half-computer, Andrej Kikelj (2003) discussed the far-flung implications of Dr. Layman’s work. Using the base of half-human, half-computer, Dr. Layman named a new disease, Psychosomatic Technophilic, translated as “an abnormal love or attraction for technology [that replaces] the body and mind.” He was cited several times in the article Transhumanism, (Wikipedia, 2009). Also, several debates about Transhumanism were published in Wikipedia, and they identified Dr. Layman as an “anti-transhumanist” who first coined the phrase, “Terminator argument.” However, his efforts were praised by “Unpopular Mechanics,” Alan Piper, Maxim Magazine stating that Dr. Layman is the only thing standing between humans and the reign of the Terminators.

In 2018, he was featured in the cover of Pro-Files Magazine, 8th Edition, Marquis Who’s Who. He was the Executive Spotlight in Robotics, Computers and Artificial Intelligence, 2018 Edition, the Top 101 Industry Experts, Worldwide Publishing. He also appeared on the cover of the July 2018 issue of Top Industry Professionals, the International Association of Top Professionals. He received the prestigious Albert Nelson Marquis Lifetime Achievement Award (2017-2018). A lifelong student taking classes at J.J.C., Dr. Layman was inducted (2019) to Phi Theta Kappa (second induction). Terrified by the future of A.I., he predicts that a computer will pass the Turing Test by 2029 making it difficult to distinguish between a hidden computer and a hidden human. He further states that by 2030, artificial consciousness will be very realistic. Ergo, through Robowatch, Dr. Layman attempts to create awareness of this impending threat of A.I.
Contact
Top 100 Registry Inc.
David Lerner
855-785-2514
www.top100registry.com