Definition of Soul concert goers will experience the top independent soul artists up close and personal; in an intimate setting that has to be seen to be believed, Detroit’s City Theatre. Day two of this series, Definition of Soul: West Coast Experience, features Frank McComb and Sy Smith as she makes her debut performance in Detroit. 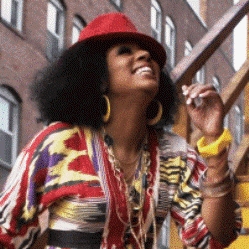 Frank McComb uses his status as an “independent artist” to create some of the most progressive and diverse music on the scene today. Frank McComb left an indelible mark in his Detroit debut solo performance in 2007. One thing that attendees at his first show will assert is that standing-room-only were not the words to properly describe the packed crowd at Detroit’s Jazz Cafe. Expect Frank McComb to deliver a 70’s inspired performance of Jazz, funk and soul reminiscent of Donny Hathaway and Stevie Wonder. The best description for the music he creates is 70’s throwback. Frank’s mature, ballad-heavy music often moves people to tears.

Sy Smith emerged with her independent debut The Syberspace Social in 2005, which featured contributions vocalist Anthony Hamilton and famed producers such as James Poyser and Victor Duplaix. She regularly sang with Vonda Shepard on the popular FOX television series “Ally McBeal.” In addition, Smith shared the vocal spotlight with legendary singer Al Green performing the title song to the Showtime series “Soul Food.” Smith takes the listener to a cosmic café where freedom is encouraged and progressive thinking is demanded. Her new release, Conflict, seems to provide more of the signature Sy Smith, rendering a poised mixture of Funk, Soul, Hip Hop, Jazz, Rock with a little social commentary for good measure. Mosaicthump and Syberspace is a combination for the ages, come see the two collide. 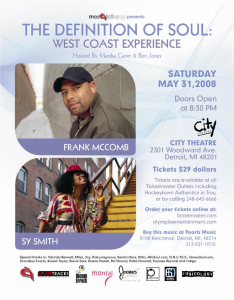