Newcomers, Kaz-N-Jam Productions Launch the "Relive the Legacy" Tour Along the Route of the Underground Railroad Through the Eyes of the Original Fisk Jubilee Singers

Author and Playwright, Jamima B. Jones, in association with Kaz-N-Jam Productions launch a historical tour departing from Nashville's Union Station on June 8, 2021 to promote the novel and stage production of "The Story of Jubilee," an epic tale; available on Amazon.com and numerous Podcast platforms. 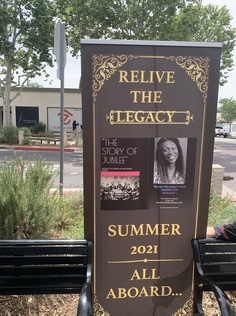 Nashville, TN, June 04, 2021 --(PR.com)-- Arriving in Nashville on June 1, the Author and Producers invite travelers to tour the halls of Jubilee Hall; the first permanent structure erected for the education of African-Americans, whose construction was paid for with funds earned from these students' untiring efforts. June 4 finds Producers at The “Hermitage,” President Andrew Jackson’s plantation. Additional tour stops include: the Masonic Temple where the students earned $400 for a performance in the late 1870's, the Jubilee Bridge; named in the students’ honor, and the Tennessee State Capitol, site of the National Conference of Colored Men of the United States, held May 5-9, 1879 as discussed on Author's podcast: “The Story of Jubilee.” Finally, followers will board the train on June 8 where they will disembark in Cincinnati's Fountain Square, as did the original Fisk Jubilee Singers after departing Fisk on October 6, 1871.

July finds the EPs at Captain Simeon’s Potter House in Newport, Rhode Island, as well as the Admiral Fell Inn in Baltimore, MD; two historical locations where the students lodged during their maiden tour. Author Jones is available for interviews via all media sources, in addition to book-signing events at local bookstores, libraries and HBC’s. For further information or to schedule an interview, please contact Author directly at: thestoryofjubilee@gmail.com.
Contact
Kaz-N-Jam Production
Jamima B. Jones
661-313-7272
thestoryofjubilee.vpweb.com
jamimajones5@gmail.com