Joy Nash joined the cast of Serpentine Pink - an LGBTQ+ neo-noir set in the desert-weird world of Joshua Tree, CA, confronting domestic violence and the trauma that stems from it. 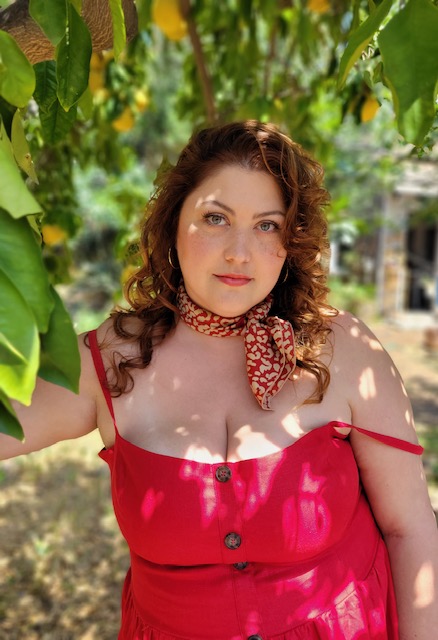 “It was pretty revelatory to play a love interest who was actively pursuing someone and not waiting to be picked, or fending off someone else’s advances,” said Joy Nash. “To really try and seduce someone? That’s not something I’ve ever done before and I was surprised at how powerful it made me feel.”

Nash plays Stella Hawk, a Joshua Tree midwife with her eye on Henrietta despite her jealous partner, Jaymee. Hawk’s seemingly harmless flirtation becomes the impetus for Henrietta and Jaymee to confront their trauma and toxic relationship. As writer Megan Breen describes, “Stella Hawk is key to Henrietta and Jaymee’s relationship arc...her being a source of both validation and distress in Serpentine Pink allows the protagonists to wrestle with the pleasure and pain of visceral love and how this duality can be revelatory and healing.”

Joy Nash
Joy Nash is an actress, writer and voice talent, known for Dietland (2018), Twin Peaks (2017), and The Mindy Project (2013). She received a Webby Award Official Honoree selection for her 2007 video “A Fat Rant” and she is a Penguin Random House and Audible Audiobook Narrator with over 85 recorded titles.

Serpentine Pink
Set in the desert-weird wilds of Joshua Tree, California, Serpentine Pink is a distinctively visceral and surreal independent, female-centric film that digs into the various and rigorous ways a heart heals from trauma. Inspired by France’s Grand Guignol style of horror theatre, and utilizing a lyrical language both visual and verbal to capture the strange poetry of the Mojave land and soundscape, Serpentine Pink follows a reclusive biker woman and her John Wayne-obsessed exotic dancer lover’s disturbing fallout after a violent acid attack. An ethereal psychic and her aspiring shaman companion converge with supernatural forces in an attempt to confront and then heal the women’s – as well as their own - deep-rooted, personal pain that comes from trying to break the cycle of possessive love.

About Hard Knock Productions
HKP was founded in 2020 with the aim to inspire audiences into activism that results in sustainable positive social impact. We develop unique stories to increase the visibility of LGBTQIA+, BIPOC, and people with mental illness and other disabilities, and we leverage these stories to educate others and advocate for marginalized communities through partnerships with non-profit organizations. We strive to create a positive, inclusive, and innovative environment and we advocate for our community in order to develop the next generation of independent artists, musicians, and filmmakers. We are committed to land acknowledgment, educating ourselves on their history, and engaging with communities.