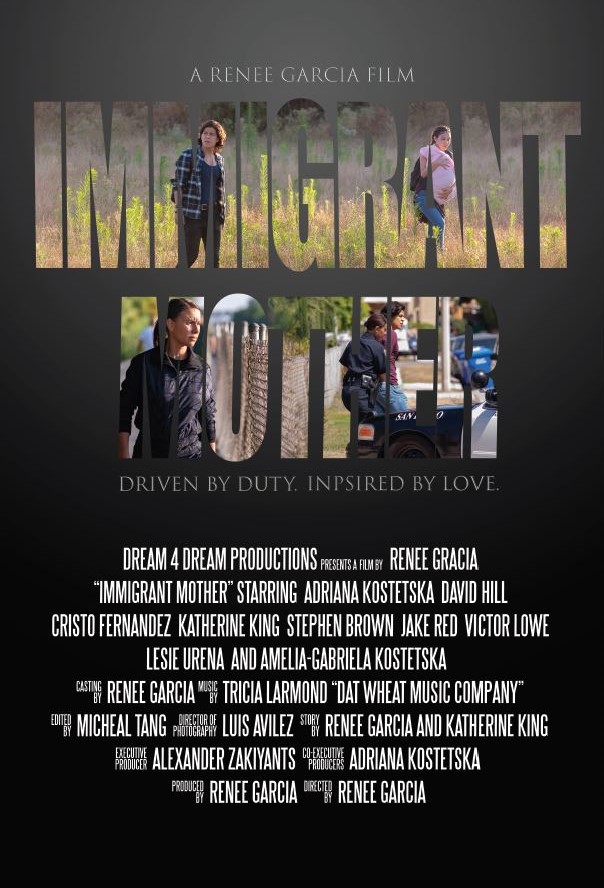 Immigrant Mother (Best Crime Film, Best Actress, Best Supporting Actor, Best Female Director, Best Woman Short), produced and directed by Renee Garcia, follows Ukrainian-born cop Oksana Williams (played by newcomer Adriana Kostetska), who discovers an illegal immigrant (Cristo Fernández) near the border with a baby in tow. The lines are blurred between duty and love as the officer is driven by her personal struggles to pursue the truth in a film that manages to gracefully straddle contentious issues without taking sides.

Katherine King, a writer based in Santa Monica, has “always been drawn to culturally diverse stories,” in part influenced by her years spent as an English as a Second Language teacher both locally and abroad. “You are always more than an instructor-you are often their first American friend, and I would field questions ranging from restaurant recommendations in Santa Monica to how to fill out immigration forms.” She recalls a favorite memory of "potlucks" where students brought in their family dishes to share in class. The lesson of food loaded with cultural meaning and generosity translated to her writing; as one of her favorite details of the film is when Oksana prepares “borscht” (cabbage soup) for her husband, adding an authentic Ukrainian "flavor" to the scene as well as providing warmth to her otherwise "tough-cop" character.

Director Renee Garcia, a fourth generation Mexican-American aimed to spotlight human trafficking as well as create an homage to her late uncle Art Escamillas, who served thirty years in the LA County Sheriff’s Department. At the recent Oct. 2 screening at Grauman’s Chinese Theater in Hollywood, several attendees who were cops knew Escamillas and said, “he would be proud she is following her dream as a filmmaker.” Other attendees greeted the film with applause and shouts of “Futbol is Life!” in response to Cristo Hernández’ screen credit.

Screenwriter Katherine King kept the same pace for the project I’m Gonna Tell God Everything, an internationally-produced and screened short film about the Syrian conflict through a child’s eyes, starring then-five-year-old Vivaan Bisoi (Life In Pieces). Like Immigrant Mother, the film boasted a culturally diverse creative team that “starts valuable authentic conversations that find their way into the film.” Upcoming endeavors in the works promise similar themes: as part of Walnut Street Entertainment, Katherine King and Derrick Dawson are in talks with producer/director/writer Bentley Kyle Evans (The Jamie Foxx Show, Martin) to produce feature films Shadows, about an African-American teenager embroiled in a school shooting, and Divided Hearts, an interracial love story set in Prohibition-era Arkansas.

Immigrant Mother was last screened at the Silicon Beach Festival (Oct.2-7) at The Chinese Theater in Hollywood, garnering the “Best Supporting Actor” award for Cristo Fernández.

Immigrant Mother brings awareness to the audience about the current state of human trafficking.