La Roca Futbol Club is teaming up with Refugee Soccer to collaborate and commit to serving, supporting, and maximizing opportunities for refugees here locally in Utah and across the USA. 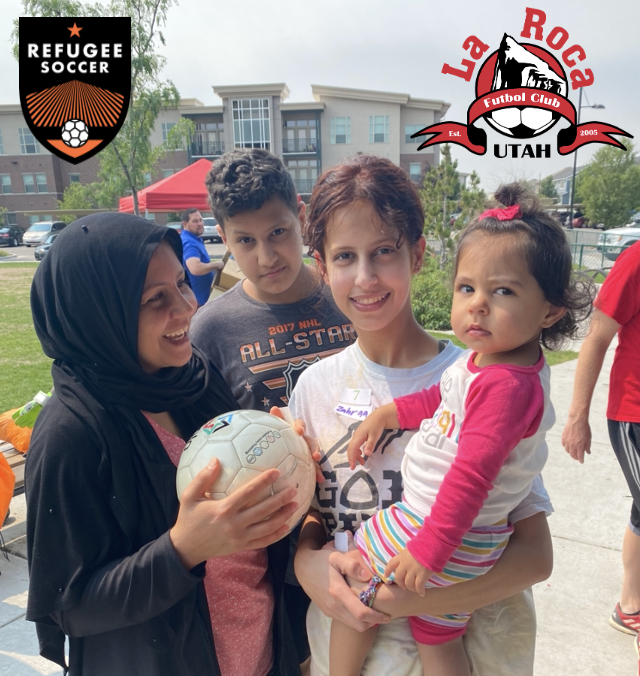 South Weber, UT, December 13, 2021 --(PR.com)-- La Roca FC is delighted to team up with Refugee Soccer to provide soccer training clinics, life and educational mentoring, and necessities such as food and clothing to help refugees adjust to life in the United States. Refugee Soccer, which has already created a notable track record of helping the refugee community in the US since 2016, will now have additional help. Both Refugee Soccer and La Roca FC believe that soccer is a universal language. Through the shared love of soccer, they aim to use this beautiful language of soccer to bring together people from different backgrounds, beliefs, and life experiences and build a stronger community comprised of individuals focused on kindness, respect, and goodness.

The primary goal of this new partnership is to promote mutual goodwill between the mainstream community and the large refugee community here in Utah. They will accomplish this by engaging La Roca FC coaches, players, families, and staff to support the refugee youth through various soccer-related activities organized by Refugee Soccer. La Roca FC has already created a strong and well-respected presence along the Wasatch Front with its wide outreach into all parts of the community, which will make serving refugees consistently and reliably easier.

“We can’t wait to officially get started with Refugee Soccer,” said Adolfo Ovalle, La Roca’s Founder and Technical Director. “I’ve been telling my staff that La Roca FC isn’t complete until we fully give back to the community and help those in need. Not only is it our goal to build great soccer players, but we want to create great human beings. Money or resources should never prohibit someone from playing the game we all love. We should all help – we are all in this together.”

As a timely and significant example of the ways in which this new partnership will work, Refugee Soccer is currently launching a unique and exciting project to help Afghan families airlifted from Afghanistan in conjunction with the US military exit from the country over the summer. There are currently thousands of Afghans housed in camp-like conditions at US Military Bases awaiting permanent placement in communities across the country. Founder & Executive Director, Adam Miles, explained: “The chance for our team to use soccer as a means to connect with and engage hundreds of Afghan youth in this traumatic time in their young lives is a such a privilege and, frankly, the entire reason I started Refugee Soccer in the first place. To be able to have La Roca FC involved in this project is absolutely fantastic and I can’t wait to watch the joy happen for both our new Afghan guests and those volunteers lucky enough to serve them, myself included.”

Ahmed Bakrim, La Roca SLC Director of Coaching, who immigrated to the United States in 2001 said, “It’s a privilege to have the opportunity to work with these kids who’ve been displaced. I know what it feels like to be in a country where you don’t speak the language, understand the culture and you don’t know what to expect from people’s behavior. It’s so hard to adjust and you constantly feel homesick. The only thing that made me personally feel comfortable was having those around me smile, be friendly and try to open a conversation, even though I didn’t understand. And in this case, the soccer game is going to break the barrier.”

Currently, La Roca FC is conducting a Christmas food drive for the refugees. Families and players are encouraged to drop off food before their indoor sessions at La Roca Park (South Weber), Zions Bank Real Academy (Herriman) and in Spanish Fork. Starting January 2022, regular soccer clinics and training for the refugee youth will take place at the Zions Bank Real Academy with a full staff of experienced La Roca FC coaches.

About La Roca FC
La Roca Futbol Club was established in 2005 to provide a quality competitive youth soccer program in Utah and has grown to become the most successful club in the state with more State Cup Championship titles than any other club in the state. La Roca FC trains serious youth soccer players who desire an opportunity to develop and showcase his/her skills to the fullest potential. To date, La Roca has produced 19 professional players both domestically and internationally and helped over 400 athletes obtain a collegiate scholarship. La Roca FC offers players a chance to play at the highest level of state competition and compete in various regional and national tournaments and leagues. La Roca is a 501(c)(3) corporation under the direction of its Board of Directors.

About Refugee Soccer
Refugee Soccer was formally established in 2016 as a dedicated program under the 501(c)(3) entity known as Bridges To America, Inc. based in Salt Lake City, Utah. Bridges To America was started in 2005 originally to reunite African families separated by war, famine, and poverty. Soccer became a key part of Bridges’ efforts around 2013 as founder and executive director, Adam Miles, started to involve his four children in the effort. His then 13-year-old daughter, Kylie, a goalkeeper played a fundamental role in raising funds to deliver 100 soccer balls to kids living in rural villages in Ghana, West Africa through the Bridges’ program known as Save-A-Thon For Africa. This effort was the genesis of Refugee Soccer.

Today, the mission of Refugee Soccer is to create moments of hope and happiness through soccer around the world. Refugee Soccer was formed to create and support solutions that combat the tremendous losses of productivity, progress, and hope that result from the massive displacement occurring in the world. Soccer is our secret weapon.