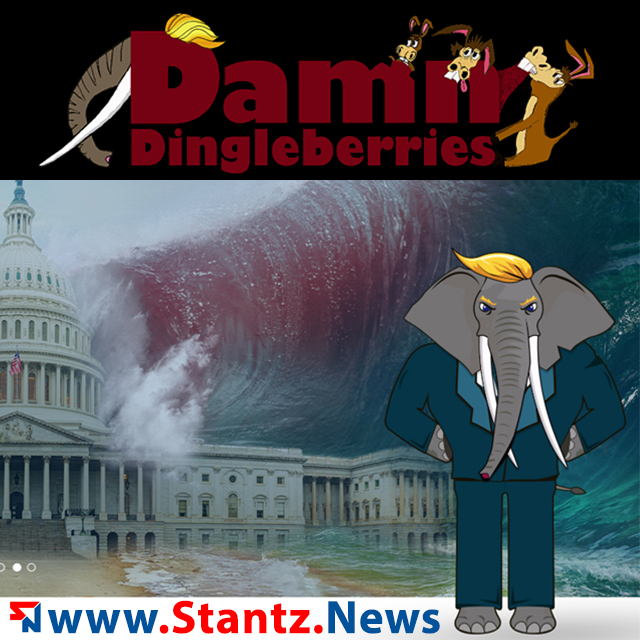 DAMN Dingleberries Co-creator and writer, Tony Stanish, described TROMP as "An advocate and supporter of the Key Constitutional principles of Liberty and Equal Opportunity,” and further stated, “These principles which Made America Great are worth protecting to Keep America Great.”

Go to, DAMN Dingleberries’ Crowdfunding Campaign at https://igg.me/at/DAMNDingleberries to view the Trailer and participate in the campaign.

STANTZ News produced this Animated Trailer introducing several DAMN Dingleberries characters and themes as a key part of its Campaign on the popular Crowdfunding platform, Indiegogo. This 3-minute Trailer has TROMP explaining how a witty and humorous sitcom targeting critical issues facing all Americans will create the Venue for Social dialog necessary to bring about consensus and compromise.

According to Co-Creator and Artist, Vinny DiGirolamo, “The concept of a Presidential Avatar, TROMP, was born in protest of artistic censorship - censorship typical of the cancel culture now infecting all of society.”

DiGirolamo was invited to participate in an Art Exhibit that called for themed artwork depicting the "Political Polarization in America Today." He called the curator and expressed an idea for a painting depicting an American Soldier wrapping an American Flag around a cold, scared, and desperate child lost on a battlefield. DiGirolamo said he felt the imagery represented the raging battlefield in American politics as it illustrated even in the inhumanity of war, humanity still exists and will triumph in the end.

The curator listened and then informed DiGirolamo that Pro-Patriot messaging helped Donald Trump win the Presidency. This ‘Liberal’ curator then went on an uninvited political rant disparaging our newly elected President and the Patriotic Flag Flying Americans that voted for him. He finished by saying, “All Submissions will convey an anti-Trump theme, or they will not be accepted.”

Unwilling to be bullied by an angry ideologue, DiGirolamo politely withdrew from participating in the exhibit, called his best friend, Tony Stanish saying, “This is not right. We have to do something!” From that conversation, TROMP was born and their First Cartoon, “DAMN Dingleberries” debuted in early 2017.

Stanish pointed out the Irony of the event, “An Ideologue’s attempt to curtail Artistic Expression and Liberty is directly responsible for the creation of TROMP and our pragmatic voice of humor and reason.”

According to Stanish, “STANTZ News’ core belief is that America was created from the concept of individual rights and to ensure those rights, one individual united with other individuals to create the ‘WE’, E Pluribus Unum, or From Many One.”

Stanish continued, “We Intend to safeguard this key principle of Americanism and Liberty and ask that you Join Us to take this messaging to the next level in an animated series where TROMP will be Our Voice for pragmatic solutions.” We created this poster to support an art exhibit where a piece of the original artwork of the TROMP comic series was displayed at a SLC Art Gallery Gala event. Please download and circulate it as you wish.