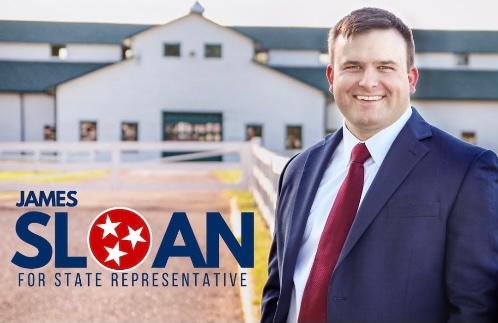 Franklin, TN, August 04, 2022 --(PR.com)-- According to sources, early voting numbers appear to be down from previous mid-term elections the past two cycles; however, James Sloan is confident he is gaining ground in the race for Tennessee House of Representatives District 63.

District 63 is the legislative seat being vacated by Glen Casada, so this is one of the few Tennessee state legislative seats in which there is no sitting incumbent in the race and a new representative will be elected this year to fill the seat. There are three candidates seeking to win the General Assembly seat for District 63.

Campaign staff at James Sloan’s headquarters, one of the candidates seeking the District 63 seat, said that they are very positive going into today’s primary based on contact with the voters in the district after the close of early voting in Williamson County. “The overall mood of voters across the county and state this election cycle is very different from past years in that they are tired of candidates boasting endorsements from unions, PACs, other politicians, and fake internet news sites funded by dark money from outside of the area in which candidates are running to sway the voters inside that individual district or county,” said Sloan’s Campaign Staff.

James Sloan said, "I have heard that same statement made by many voters on the campaign trail. People are tired of fake news and politicians scratching each other's backs while masking the truths of the actual candidates in the races. Efforts have been made to hide the truth about many candidates." Sloan also stated, "I think that is important to the voters of District 63 when they choose a candidate that they feel will represent Tennessee values and cultures in the state legislature."

“I have been as transparent as I can be this campaign season by posting my platform, stance on the issues, demographic background as a Williamson County citizen for decades, and my personal commitment to the voters of District 63,” Sloan emphasized.

“The voters should be informed that organizations and PACs with the names, Tennessee, Education, etc. do not represent the voters inside the county or district and are actually based outside the county and most outside the state of Tennessee. This is dark money politics at work to have the voters believe that large voter groups inside the county or district are supporting a particular candidate and that is not true and is very misleading,” Sloan stated. “All information relative to my campaign has come directly from my campaign staff and/or me,” Sloan concluded.

Today, Thursday, August 4, 2022, is the Tennessee Primary for state and federal elected offices and everyone is encouraged to exercise your Constitutional right to vote as a citizen of the United States and great state of Tennessee.
Contact
Paid for by Campaign for Sloan for TN
James Sloan
615-788-6592
www.sloanfortn.com
LinkedIn: https://www.linkedin.com/in/james-sloan-054063241