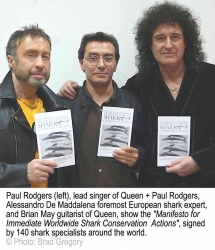 New York, NY, October 09, 2008 --(PR.com)-- Brian May, guitarist of Queen, and Paul Rodgers, lead singer of Queen + Paul Rodgers (and also of Free and Bad Company), join 140 researchers to urge the governments of all nations to stop the slaughter of sharks. With the "Manifesto for Immediate Worldwide Shark Conservation Actions," that has been signed by 140 shark specialists around the world, they ask governments for protection of endangered shark species, a ban on shark finning, management of fisheries, control of trade for shark products and investment into research on sharks to better assess stock status.

An estimated 50% of the world shark catch is believed to be taken accidentally while fishing for other species such as tuna and swordfish, especially with pelagic longlines, fishing lines 18 to 72 kilometers long, with an average of 1500 baited hooks.

It has been estimated that the number of sharks caught annually to be upwards of 100 million and that, in recent decades, some shark populations have declined by more than 90%. In the Mediterranean Sea, of 50 shark species recorded, 13 are close to extinction, while only one of these, the great white shark, is protected by the European Community. For more information, go to www.sharks.org

The manifesto for shark conservation is available online at:
http://www.sharkproject.org
/grfx/MANIFESTO%20FOR%20WORLDWIDE%20SHARK%20CONSERVATION%20(A4)%20-%20English.pdf