This holiday season, astronomy enthusiasts can save hundreds of dollars at OPT on the most popular telescopes from the two largest telescope manufacturers. Meade is offering instant rebates up to $300 on popular Meade LX90 and LX200 telescopes. Celestron is providing instant rebates of $300 on their hot Celestron CPC telescopes as well as a $100 Visa debit card on their exciting Celestron Nexstar SE telescopes. The special sales events only last until December 31st 2008 at OPT. 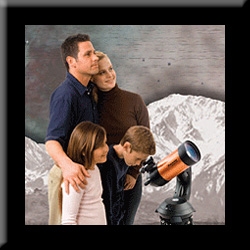 Oceanside, CA, December 06, 2008 --(PR.com)-- OPT is excited to announce special sales events from the two largest manufacturers of telescopes and astronomy products, Celestron and Meade. From now until the end of the year, OPT is participating in sales events on the Celestron CPC telescopes and the Celestron Nexstar SE telescopes. For a limited time customers will save $300 instantly on the entire CPC telescope lineup. The Celestron CPC telescopes feature renowned Celestron optics with the latest technologies, including built in GPS technology and full computerization. The CPC series offers advanced features for budding astronomy enthusiasts, but is also extremely easy to setup and use. With the current instant rebates, the prices are at their best ever.

“The CPC telescopes,” Weatherwax continues “are the next step up in the Celestron lineup. The CPC telescopes have a larger dual fork arm and tripod for greater stability, advanced drive systems for astrophotography and imaging, as well as additional features for the more advanced user.”

Meade Instruments is also participating in the holiday specials. From now until December 31st 2008 astronomy enthusiasts can save up to $300 instantly on popular telescopes from Meade Instruments. OPT will provide instant rebates on the 8” and 10” models of the Meade LX90 telescopes and Meade LX200 telescopes. The Meade LX90 and LX200 telescopes feature the latest advanced coma free (ACF) optics for excellent image quality at an affordable price. Both LX90 and LX200 models are fully computerized and feature a built in GPS module for incredibly simple setup and operation. The Meade LX200 telescopes are an upgrade from the LX90 telescopes, as the LX200 series include larger fork arms for greater stability, an advanced Autostar II computer system with more features and abilities, and additional accessories such as a primary mirror lock and zero image shift focuser.

“The Meade LX90 telescopes are perfect for visual use and beginning to intermediate astrophotography” answers Weatherwax when asked about the main differences between the two models. “The LX200 telescopes provide a more stable platform, advanced features and included accessories that make them a better option for those interested in more advanced astrophotography or CCD imaging.”