Custom limited-edition shoe design inspired by the groundbreaking art style of the graphic novel series, The Red Star, to be released at Comicon International San Diego 2009. 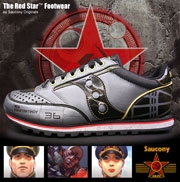 San Diego, CA, July 15, 2009 --(PR.com)-- Inspired by The Red Star™, one of the most critically acclaimed independent graphic novels of the decade, Saucony® introduces the Jazz Lo Pro - Red Star sneakers, only 800 pairs created world-wide. And like the characters that inhabit the world of The Red Star™, these shoes are more than they appear to be. Flexible and lightweight, yet full of style, these limited edition shoes will be on sale from Team Red Star at Booth #3513 or buy them online at www.zappos.com/n/p/dp/57416689/c/2500.html

The Red Star, one of the most celebrated graphic novels of the decade, is an epic mythology inspired by the art and history of the Soviet Union. Sword of Lies is the 4th graphic novel in the collection. Integrating traditionally drawn characters and computer generated environments, The Red Star is unique in its cinematic visual style.

With unforgettable pencils by multiple Eisner nominee Christian Gossett and extraordinary digital painting by the world famous Weta Workshop New Zealand, this 200 page graphic novel not only continues the adventures of the Skyfurnace Konstantinov, it takes readers back to the origin story of The Red Star.

This long awaited Trade Paperback #4, and its limited edition hard cover, will be available from Team Red Star at Booth #3513. The Red Star: Sword of Lies won the gold medal at the 13th annual Independent Publisher Book Awards in May 2009 at Book Expo America.

Red Star series creator Christian Gossett will be making appearances throughout the week, signing and sketching at Booth #3513 during Comicon International San Diego 2009.

The Red Star: The Epic Continues - a supply of the classic Red Star Trade Paper Backs, nominated for multiple Eisner awards and voted one of the 100 greatest graphic novels of all time by Wizard magazine, will be available for purchase at special Comicon discounts.

The Red Star is Now Available on the iPhone and Google Android.

Team Red Star is pleased to announce its release of the adaptation of The Red Star to the iPhone and Google Android. Simply search for The Red Star #1, #2 and #3. The Red Star #4 will soon be available.

The Red Star video game will be available on the Wii and Sony PSP this upcoming fall.

Archangel Studios is an independent publisher of graphic novels. Its award-winning series, . The Red Star, is an epic mythology inspired by the art and history of the Soviet Union. 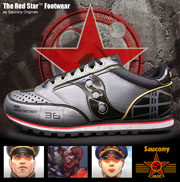