The Hottest Halloween Costumes of 2009

HottestCostumes.com has published its list of the Hottest Costumes for Halloween 2009. The list is compiled through surveys of multiple online costume retailers. Their answers are compiled into four costume categories, hottest girls costume, hottest womens costumes, hottest boys costumes and hottest mens costumes. 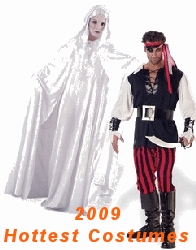 Dayton, OH, October 20, 2009 --(PR.com)-- HottestCostumes.com has published the results of its survey of the top costumes for Halloween 2009. Each year the website contacts costume retailers to take the pulse of what the hottest costumes for that year will be.

The 2009 results displayed a trend toward traditional costumes. While this was not totally unexpected due to the typically lower cost versus costumes that are licensed from recent movie blockbusters. There were still several movie character costumes that made the top ten. This was especially true in the mens and boys costume categories.

Kristen Grace, Affiliate Marketing Manager of BuyCostumes.com stated "Given the fact that Halloween falls on a Saturday this year means adult 'party-going' customers will likely buy one or even two costumes! We expect our adult customers to spend just as much on Halloween as last year." when queried about expected sales due to the current down economy. "Responses similar to Kristens' lead us to believe that even with consumers feeling a financial pinch, they are looking forward to the inexpensive escapism that Halloween provides" stated Steven Stackman owner of Specialty Marketing Service, the operator of www.HottestCostumes.com and www.BestCostumeContest.com a site for consumers to upload their favorite costume pictures and compete to win prizes.

The complete list of the 10 top halloween costumes for girls, women, boys and men has been published at www.HottestCostumes.com along with prices and online retailer availability.