Poker players from around the country meet in Orlando Florida to compete for the title of WPTAPL National Champion and to raise money for five different charities. 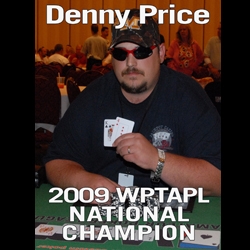 Wichita, KS, April 24, 2010 --(PR.com)-- 652 poker players from across the US and Puerto Rico sat down April 17th in Orlando, Florida to battle for the prestigious title of World Poker Tour Amateur Poker League (WPTAPL) 2009 National Champion and a $10,000 entry to a WPT main event of their choice.

WPTAPL is proud to introduce their newest Champion Denny Price from Moberly Missouri. Denny Price held out to the very end to win heads up against Anthony Williams from Tennessee where his K4 was enough to take down the win, the title and his chance at becoming the next WPT Poker Made Millionaire.

WPTAPL hosted a crowd of over 1,000 as poker players and friends invaded the Double Tree Resort on International Dr. to take part in 3 days of festivities awarding over $25,000. Events included a variety of charity events which rose over $20,000 for causes such as Susan G. Koman, Big Brothers and Big Sisters, Humane Society of the US, I Love Music Foundation and Children’s Miracle Network. These events also awarded over $15,000 to the participants of which almost 1,000 people participated.

WPTAPL expects to host next years Championship, renamed the World Poker Tour Amateur Championship (WPTAC) in Las Vegas with participation in the thousands. To find out more about WPTAPL and how to participate, become a host location, or open a league in your area visit WPTAPL.com. WPTAPL… No Risks, Just Rewards.