To commemorate the fortieth anniversary of the end of the Vietnam War, author John Podlaski offers the electronic version of his novel, "Cherries," at a 50% discount to the reading public. 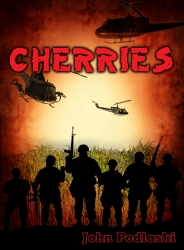 Sterlling Heights, MI, May 10, 2010 --(PR.com)-- Author and resident, John Podlaski, has "Cherries" published, a 464-page book chronicling the experiences of young, eighteen year-old Army Infantry soldiers during their tour in the Vietnam War. At that time, scores of naive, frightened, and awed young men arrived daily in Vietnam; they were immediately branded "Cherries" (slang for virgins) by their peers. These boys were forced to become men virtually overnight, learning the ropes quickly to make life or death decisions, while depending upon one another to survive. Thrust into an unpopular war, these new recruits had much to learn before being accepted and fully trusted by their brothers. The first few months in country served as an intense learning experience, where they saw, heard, and endured things never thought to be humanly possible. For a limited time (Monday, May 10 through Monday, May 31) an electronic book version of Cherries, normally priced at $7.99, will be available to the public for $3.99 when downloaded at Smashwords: http://smashwords.com/books/view/13437. Please apply coupon code FT45B.

There are 2.5 million different stories from soldiers having served in Vietnam. "Cherries" is unique in the sense that it follows these teenage soldiers throughout their transitions from Cherries to war-hardened veterans. Their experiences are at times educational, horrific, comical, and tragic, in their never-ending search for the enemy through the dark, wet, bug-infested jungles and mountains of South Vietnam. Though Vietnam serves as the setting for "Cherries," this story could take place during any war.

Launched in 2008, Smashwords is an e-book publishing and distribution platform serving authors, publishers, readers, and retailers. Smashwords makes it free and easy for any author or publisher, anywhere in the world, to instantly publish and distribute a multi-format e-book. Smashwords puts authors and publishers in full control over the pricing, sampling, and distribution of their works. Authors and publishers receive up to 85 percent of the net proceeds from sales of their works. Smashwords has distribution relationships with leading online retailers such as Amazon, Barnes & Noble, and Sony; leading mobile reading apps such as Stanza, Kobo, Aldiko, FBReader, and Word-Player; and spans all major mobile platforms including Android and iPhone. Smashwords is based in Los Gatos, California, and can be reached on the web at http://www.smashwords.com.