Are We Shameless or Harmless Flirts? Queendom Releases Results of Their Flirting Study 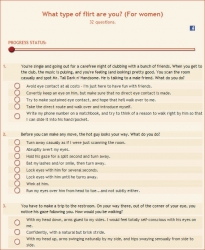 Montreal, Canada, May 17, 2010 --(PR.com)-- Queendom.com, one of the web's foremost source of personality assessments, is revealing it all - the results of their flirting study, that is. After releasing their popular Flirting Test on Queendom.com, their results reveal that men and women not only enjoy flirting, but many will wink madly and schmooze away mercilessly in order to get what they want. If you wish to take the free test, go to http://queendom.com/tests/access_page/index.htm?idRegTest=2315 (version for women) or http://queendom.com/tests/access_page/index.htm?idRegTest=2314 (version for men).

Men and women have evolved quite a bit to become the flirting specialists they are today. Gone are the days of clubbing a wooly mammoth over the head and dropping it off at a pretty girl's cave; no longer can women demurely drop their handkerchief in front of a suitor, without being chastised for littering. Yet, there are many ancient ways of flirting that still hold strong (men puffing their chest out; women seductively swaying their hips). And while the goal of flirting has expanded to reasons other than to pass on one's genes, it will always remain a timeless art.

Women are often touted as the better flirts. They're subtle and seductive, and can say so much with something as little as a wink or a smile. Queendom data, however, reveal that while women did have a slightly higher tendency to flirt, it was men who fared slightly better in terms of flirting expertise and techniques. In terms of style, both genders had a greater tendency of being "Drive-by" flirts, applying their seductive techniques anytime, anyplace, and anywhere, but mostly just for the fun of it. "Future-oriented" flirting was the next most popular flirting style (flirting to find the "one"), followed by the "Pragmatic" flirt (flirting to get something tangible, like a good deal), the "Toxic" flirt (flirting for revenge) and, pulling up the rear, the "Carnal" flirt (flirting solely for sex).

On the surface, this seems pretty innocent. Men and women love to flirt, plain and simple. It's fun, makes you feel good, and lets you know that you still "got it." Queendom decided to dig a little deeper, winding their way through the sucked-in guts, bravado, lip smacking, lash batting and seductive winks to uncover some interesting little tidbits revealed by the flirting population who took their test. This is where things became tantalizingly interesting.

"Men aren't as cavemen-ish when they flirt as some women may think," points out Dr. Jerabek, president of the company. "For instance, 11% of men who took our test would easily and shamelessly flirt with a female officer to get out of a ticket, compared to 8% of women. Men also used their flirting skills to get a deal on a car (20%), and a surprising 6% of them would actually date her in order to get a deal later on." So are women still the demure flirting maidens of medieval times? "Not quite," Dr. Jerabek adds with a smile. "27% did admit they would do that 'shyly picking off a lint on a guy's sweater' thing, but 21% also stated that they would flirt mercilessly with a bouncer to get into an exclusive club if they heard that their favorite celebrity would be there. 6% of women admitted that they would go even further than that if they had to."

So not all flirting techniques are as subtle as they used to be. However, even the hopeless flirts have, well, hope. "We often hear that flirting is an art, and I would not want to suck the magic out of it," jokes Dr. Jerabek. "We are certainly hot-wired to flirt by our genetics, and the best flirts have had the best chances of propagating. The body language used in flirting in various cultures has the same basic components - intense eye contact, smile, hair toss and coy glances for the ladies, chest puffing in men... So there is certainly a genetic component." According to Queendom data, flirting expertise does seem to improve with age, with 30+ year olds slightly outscoring their younger counterparts. "Flirting is more than genes dictating our movements. It's also a skill based on social learning and learning by observing adult "subject matter experts. Teens use the same techniques, in much cruder form, and as we acquire more experience through practice and positive and negative feedback, and as we improve our social skills, we become much more subtle … and much more efficient (if not effective)."

The study also revealed that men's most popular flirting gestures when chatting with a woman are to smile and to lean in to show interest, while women smile and look deep into a man's eyes. Other interesting flirting tidbits: 45% of men would converse with someone they found hot at a funeral; 36% would ask that person out, while still at the funeral (55% and 19% respectively for women). Only 10% of women would flirt with a male car salesman in order to get a better deal.

To claim that men are brutish and uncivilized flirts or women are notorious seductresses who use their feminine wiles to ensnare unsuspecting gentlemen would be unfair and a misconception. Granted, there are some people who use flirting as a means of manipulation, but for most, flirting is entertaining. As it should be.

About Queendom.com
Queendom.com is a subsidiary of PsychTests AIM Inc. Queendom.com is a site that creates an interactive venue for self-exploration with a healthy dose of fun. The site offers a full range of professional-quality, scientifically-validated psychological assessments that empower people to grow and reach their real potential through insightful feedback and detailed, custom-tailored analysis. 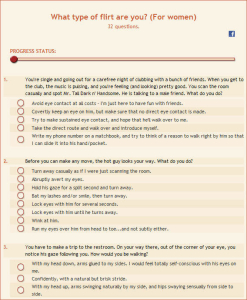 Sample of the Flirting Test 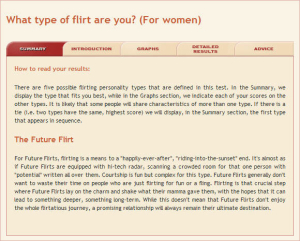 Sample of the Flirting Test report

Women are often touted as the better flirts. They're subtle and seductive, and can say so much with something as little as a wink or a smile. But Queendom data reveal that while women did have a slightly higher tendency to flirt, men fare slightly better in terms of flirting expertise.